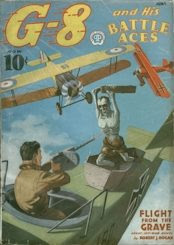 G-8 is remembered fondly by science fiction collectors for its wild elements of fantasy and horror. Many other hero pulps also had elements of science fiction and fantasy, particularly Doc Savage and The Secret 6, but there was only one hero pulp that was actually set in the future. You will see this futuristic hero in next week's Magazine of the Week.
Posted by Fantastic Reviews at 10:51 PM No comments: 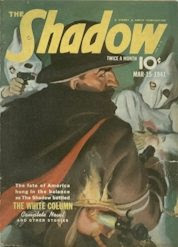 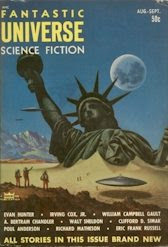 We'll return to some of the digest magazines in future BOTWs, but first let's get back to our history of the pulp magazines, with the most successful title in the "hero pulp" genre.
Posted by Fantastic Reviews at 11:18 PM No comments: 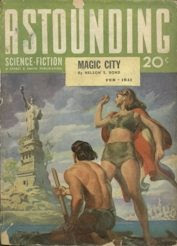 And just in case anyone wants to give Hollywood credit for adding power to the image by burying the Statue of Liberty in the sand, we'll dispel that notion with next week's Magazine of the Week.
Posted by Fantastic Reviews at 11:30 PM 1 comment: 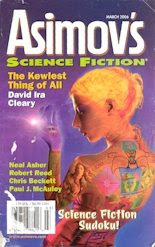 Short story "46 Directions, None of Them North" by Deborah Coates is a fun, slangy, story told by a sixteen-year old girl who has to go to Alaska to see aliens land. "Companion to Owls" by Chris Roberson is a odd fantasy of a man's mostly solitary life on the Roof of a Cathedral that covers thousands of square miles. Last, but not least, is the powerful short story "Rwanda" by Robert Reed which deals with a cheap colonization of Earth, the enormousness of such an event, and how inhumanely humans can act to one another.
Posted by Fantastic Reviews at 11:24 PM No comments: