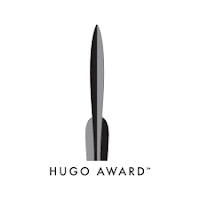 A little more than a week from now, on Friday, August 11, the 2017 Hugo Awards will be presented at this year's World Science Fiction Convention, Worldcon 75 in Helsinki, Finland. The Hugo Awards ceremony is always a highlight of a Worldcon.

Here's a list of the finalists in the four fiction categories (there are many additional categories), offered without comment, just in case you, like me (Amy), need a little reminder of the works that are up for these awards this year. May good stuff win!
Best Novel

Alien Stripper Boned From Behind By The T-Rex by Stix Hiscock (self-published)
“The Art of Space Travel” by Nina Allan (Tor.com, July 2016)
“The Jewel and Her Lapidary” by Fran Wilde (Tor.com Publishing, May 2016)
“The Tomato Thief” by Ursula Vernon (Apex Magazine, January 2016)
“Touring with the Alien” by Carolyn Ives Gilman (Clarkesworld Magazine, April 2016)
“You’ll Surely Drown Here If You Stay” by Alyssa Wong (Uncanny Magazine, May 2016)