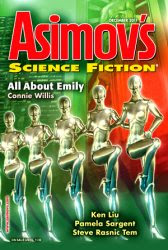 "'Run,' Bakri Says" is not a pleasant story to read, but you'll be glad you did.
Posted by Fantastic Reviews at 11:37 AM No comments:

Forgive a moment of self-promotion, but I have a new story called Random Fire just posted in the 4th Quarter 2011 issue of Abyss & Apex. This story has a rather unusual structural element to it, but one you might miss if you read quickly. I am very anxious to learn how many readers catch the gimmick, and what they think of it.

This is my fourth published story, with two more forthcoming. It's making me feel almost like an actual writer. Heck, I even have a perfunctory author page. Man, I better go write something . . .
Posted by Fantastic Reviews at 10:36 PM No comments: 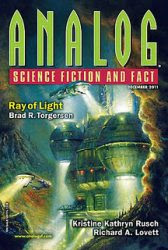 I had the pleasure of meeting Brad Torgersen at the Writers of the Future workshop -- he was a winner the year before with his excellent story "Exanastasis," which you can find in Writers of the Future, Vol. XXVI. Brad is a Chief Warrant Officer in the U.S. Army Reserve, and looked sharp in his dress uniform at the WOTF ceremony. Since winning WOTF, he has become a regular in Analog. His story "Outbound" was the AnLab winner as Analog readers' favorite novelette of 2010, and I certainly won't be surprised if "Ray of Light" makes him a repeat winner.
Posted by Fantastic Reviews at 1:56 PM 1 comment:

Aaron's Story Recommendation of the Week :: In Apprehension, How Like a God by R.P.L. Johnson 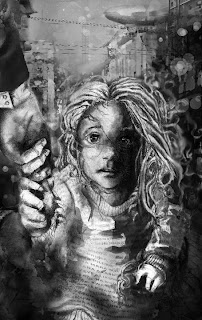 My story recommendation of the week is for "In Apprehension, How Like a God" by R.P.L. Johnson, the third SROTW I'm permitting myself from Writers of the Future, Vol. XXVII. The gorgeous illustration is by Dustin Panzino, reproduced here with his kind permission.

"In Apprehension, How Like a God" was this year's WOTF Gold Award winner, and a most worthy champion. (But not necessarily the only story that would have been worthy -- I'm glad I didn't have to vote on that.)

The story is set in a future where the internet has been superseded by the aethernet, which allows everyone to see images and information superimposed over everything around us using the Higgs field, a quantum field permeating the universe. (The Higgs field is a real physics concept, but not yet known to have all the properties described in this story.) Our protagonist, Detective Conroy, must investigate a murder at the monastic "Academy" in Uganda, home of the AI "nodes" that superimpose all that information onto the Higgs field. Conroy soon learns that the Academy is working on improving the nodes so they can "read" the Higgs field as well as "write" onto it:

Now I was the one feeling sick. "You're describing a machine that's as close to omniscient as makes no difference."

"Omniscient," the Arch-Mage weighed the ancient word. "I suppose so, within certain practical parameters of storage, processing capacity and power consumption. But in any case the project is at an early stage."

Hopefully it's not giving too much away to say that the murder relates to someone's attempt to gain control of the aethernet, control that would give you the power to change the reality being experienced by anyone you choose. The savvy reader can guess that Detective Conroy will be subject to such a reality shift, which not only makes his job difficult, but also proves an effective metaphor for his personal turmoil since the death of his daughter.

"In Apprehension, How Like a God" (the title is from Hamlet) is a great example of effective post-cyberpunk science fiction. It has all the interesting techy speculations of a future where we simultaneously co-inhabit the real world and a consensually visualized virtual world. But at the same time it is a strong story on an emotional level, with none of the coldness or smartassery that pervaded much of the original cyberpunk subgenre.

In addition to Writers of the Future XXVII, Richard Johnson has appeared at AlienSkin Magazine -- you can find that story here -- and he has another story forthcoming at Andromeda Spaceways Inflight Magazine, with hopefully many more to follow.

Let me conclude by emphasizing one more time, all of the WOTF27 winners are excellent. For purposes of SROTW, I've limited myself to three stories that especially spoke to me personally, but another reader might as easily have three different favorites. I read quite a bit of short fiction, and I keep a running list of my favorites of the year. So far I've read well over 100 pieces of short fiction published in 2011, and most of the WOTF27 winners are currently on either my top ten novelette list or my top ten short story list. That's some high-quality writing, and I am proud to be in a table of contents with every one of the other winners.
Posted by Fantastic Reviews at 2:51 PM 2 comments: