Battle of the Books, Bracket Seven, First Round :: The Demoness of Waking Dreams by Stephanie Chong vs. The Hour of Lead by Kathleen De Grave with Earl Lee 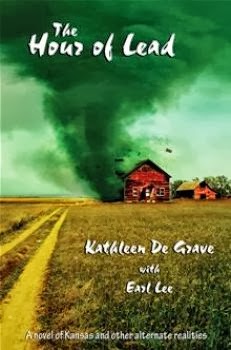 We begin the first round of Bracket Seven of the Battle of the Books with The Demoness of Waking Dreams by Stephanie Chong vs. The Hour of Lead by Kathleen De Grave with Earl Lee. The winner will be the book I (Amy) most want to continue reading after 25 pages.

The beautiful Rogue demon, Luciana Rossetti, escaped home to Venice, Italy. She just had her plans for revenge foiled and narrowly eluded capture by the Company of Angels, events covered in the first book, in which Luciana is a secondary character. Luciana goes on the hunt. Each year during the Festival of the Redeemer she makes an offering of a single victim to the Prince of Darkness. Luciana's attention falls on a striking man. Upon a closer look Luciana realizes that he's not human, he's an angel. Luciana delights at the thought of making an angel her victim.

Then the book steps backward a day to introduce the angel. Brandon Clarkson is a supervisor in the Company of Angels in Chicago. Before his death ten years ago, Brandon was a police officer. Brandon was killed in a shooting which still gives him nightmares. Brandon's unit is called into the office in the middle of the night for a conference call with the Archangel Michael and the L.A. unit of the Company of Angels. Their assignment is "disposal" of the demoness Luciana. She concocted a poison with which she killed another demon and so could kill an angel. Brandon decides to go after Luciana himself, alone.

The Hour of Lead is set in Kansas, in the near future, approximately 2040. It's a time of deadly tornadoes, new diseases, robots and nanotechnology. There's a Corporate Government called CorGo.

Weylan Collins is a nanotechnology scientist who created a pychobiotic nanobot which can untangle memories. A traumatized young boy named Mikey, one of hospital's displaced children, was made Weylan's first human test subject. Weylan believed his experimental nanobot would heal Mikey by allowing Mikey to understand that what he went through wasn't his fault. Instead the treatment left Mikey semi-catatonic.

Weylan feels guilty and considers himself a failure. But before giving up on Mikey, Weylan wants to try something first. His partly native-American grandfather years earlier showed him how to use psychedelic mushrooms.

The Battle: Here we have a battle between two very different books: a science fiction book and a paranormal romance.

The Hour of Lead begins with a new technological treatment that failed. Given what I learned in the flashbacks, I'm not sure this experiment should have been done in the first place, but maybe that's the point.

The first 25 pages of The Hour of Lead, in my opinion, didn't entirely pull me into the story. How Mikey was traumatized, when he and his sister suffered heat stroke, was heart-wrenching.

The Hour of Lead presented some speculative ideas. The futuristic setting with severe weather changes was interestingly different. I particularly liked the wind-resistant igloo homes.

The Demoness of Waking Dreams did not, in my opinion, exactly blaze new ground. It has angels and demons instead of vampires and werewolves. Nothing extraordinary or superhuman has happened yet. But the book is well written. I liked the touches of humor, such as when the old woman caused a commotion in church because she recognized Luciana as what she really was, a demoness, and the old woman was silenced by her embarrassed family.

I found The Demoness of Waking Dreams to be pleasantly easy to read. I enjoy fantasy, but I don't usually read paranormal romance.

I need to choose one book over the other based on only their first 25 pages. Who knows if I'd judge these books differently if I read them entirely. But at this point, I have to admit that I'm more interested in reading about the demoness and the angels.

THE WINNER: The Demoness of Waking Dreams by Stephanie Chong

The Demoness of Waking Dreams advances to the second round, to take on either Beautiful Monster by Jared S. Anderson & Mimi A. Williams or The Rise of Ransom City by Felix Gilman.

To see the whole bracket, click here.
Posted by Fantastic Reviews at 10:11 AM No comments:

Battle of the Books, Bracket Seven

Announcing Bracket Seven of the Fantastic Reviews Battle of the Books!

We have finally arrived at our seventh bracket of the Battle of the Books. Apologies for our delays. We have fallen way behind our originally planned schedule. Since last April, each of us here at Fantastic Reviews have been dealing with our own, completely separate, changes in our real lives. Changes which unfortunately made it more difficult for us to find time for reviewing books.

Aaron reviewed and judged the first, second, fourth, fifth and sixth brackets of the Battle of the Books, won by Elizabeth Bear’s Range of Ghosts, James Renner’s The Man from Primrose Lane, Paolo Bacigulupi’s Drowned Cities, Keith Brooke’s Harmony, and James S.A. Corey's Caliban's War.  I (Amy) reviewed and judged the third bracket won by Ian Tregillis’ The Coldest War.  This new group of contenders in Bracket Seven will be judged and reviewed by me (Amy).  (I also, as webmaster, pulled together and formatted all the book cover graphics)

We've put together 16 more contenders, selected four "seeded" books -- the four we are most looking forward to out of this group (marked with asterisks) -- placed one seeded book in each quarter of the bracket, and then filled in the rest of the bracket randomly. Here are your matchups.

Some notes on the field:
-- Classifying books before you read them can be difficult, but my best guess is that three are near-future science fiction, three are steampunk, three are paranormal romances, two are YA science fiction, and there's one book each of science fantasy, action adventure, werewolf horror, erotic thriller, and an occult spy thriller.
-- Of the competing books, eleven are written by men and three are by women. One book is a collaboration between a man and a woman. Another book is by a woman with credit to a man.
-- A little over half of the books are part of a series: two begin a series, and six are continuations or subsequent books in a series. Seven of the books seem to be stand-alone novels.
-- Three books are published by Pyr, two by Tor, and one each from Ace, Harlequin MIRA and Montlake Romance. As far as small publishers, See Sharp has two books, and one book each are from ECW Press, Belfire Press, Damnation Books, and HCI Books. The remaining two books look to be self-published.

Good luck to all the contenders!
Posted by Fantastic Reviews at 5:31 PM No comments: