Aaron's Book of the Week: False Night by Algis Budrys 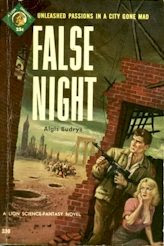 Continuing our tribute to Algis Budrys (1931-2008), the Book of the Week is his first novel, False Night, published by Lion Books in 1954. Like all of Budrys's early books, False Night was a paperback original. Because Lion Books was a small publisher (whom BOTW devotees may recall for its early edition of Frankenstein ), this edition has become hard to find. Even harder to find, however, is the revised edition published under the title Some Will Not Die, next week's Book of the Week.

False Night / Some Will Not Die is a post-apocalyptic tale set after most of America's population has been wiped out by a plague. In its bleak and gritty approach to this subject matter, the novel prefigured Cormac McCarthy's recent Pulitzer Prize winner The Road, published over 50 years later. Of course, False Night is science fiction and The Road is not, for reasons that will make sense to you if you squint really hard and slap yourself sharply across the face three times.
Posted by Fantastic Reviews at 11:08 PM No comments: 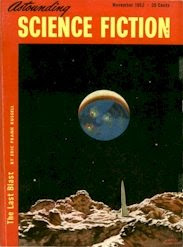 Continuing our tribute to Algis Budrys (1931-2008), the Magazine of the Week is the November 1952 issue of Astounding, cover art by Charles Schneeman. When published, the highlights of this issue were the second part of Isaac Asimov's serialized novel The Currents of Space and "Last Blast," a novelette by popular author Eric Frank Russell. But in hindsight, this issue was most important for launching the career of Algis Budrys, with his first story "The High Purpose."

Algis Budrys went on to become an important science fiction author for about the next ten years. After that, he wrote only sparingly -- although his 1977 novel Michaelmas was very well-received, and its premise of a media mogul who manages to assume control of global politics is perhaps more relevant today than ever -- focusing his energies instead on editing and reviewing. He was a long-time reviewer for F&SF and the Chicago Sun-Times. In recent years, he was the editor of Tomorrow magazine (where he rejected the first story I ever tried to sell, a truly dreadful piece that did not at all deserve the gentle note he sent me). He also managed the L. Ron Hubbard's Writers of the Future contest, which under his leadership became a very useful resource for aspiring writers, discovering such major authors as Stephen Baxter, Karen Joy Fowler, James Alan Gardner, Robert Reed, and Patrick Rothfuss, despite the Scientology baggage the Hubbard name carries.
Posted by Fantastic Reviews at 10:49 PM No comments:

Aaron's Book of the Week :: Who? by Algis Budrys

The Book of the Week is Who? by Algis Budrys, in honor of Mr. Budrys, who passed away Monday at the age of 77. (Incidentally, it was not really my intent to use BOTW as an SF/F obituary column, but it seems there are just too many authors, editors, and artists I admire who are now in their 70s, 80s, and 90s to avoid it.)

This is the first printing, paperback original of Who?, published exactly 50 years ago, with cover art by Robert V. Engel. In Who?, an American scientist traveling behind the Iron Curtain is badly injured, and Soviet doctors use cybernetic technology to save his life. But when he returns home, no one is sure if he can still be trusted or if the Soviets have brainwashed, modified, or even entirely replaced the man they knew. In its use of cybernetics, Who? prefigured The Six Million Dollar Man, but Budrys applied the concept to craft a political thriller with some interesting commentary on the Cold War mentality. The Cold War featured prominently in much of Budrys's writing, no doubt because it profoundly affected Budrys's life. Budrys was born in Lithuania and came to the United States in 1936 when his father was consul-general. His family was then exiled in America when the Soviet Union seized control of Lithuania.

Who? was made into a film starring Elliott Gould, originally called Who? but re-released under the absurd title Robo Man. This is one of two films based on Algis Budrys works; the other is To Kill a Clown, starring Alan Alda as a Vietnam vet who goes berserk. Both films are now rather obscure -- I couldn't find either at Netflix.

Who? was a nominee for the Hugo Award for Best Novel of 1958, reflecting Budrys's rapid emergence as one of the leading authors of the science fiction field. Budrys had only a few years earlier sold his first story, appearing in next week's Magazine of the Week.
Posted by Fantastic Reviews at 12:11 AM No comments:

Aaron's Book of the Week :: Rendezvous by D. Alexander Smith 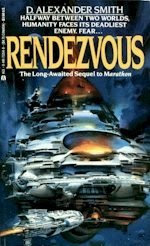 Continuing our tribute to artist John Berkey, the Book of the Week is Rendezvous by D. Alexander Smith, cover art by Berkey.

This is a first printing, paperback original published in 1988. It is not much of a collector's item, but I chose it for this week's BOTW because it is a typical example of John Berkey's renowned spaceship art, and because Rendezvous is an old favorite of mine. Rendezvous is the middle volume of the Marathon trilogy, but while the middle book is the weakest in many trilogies, here it is far and away the strongest book of the series. This is because the Marathon trilogy examines mankind's first contact with a strange alien species, and Rendezvous is the volume where the first contact actually occurs. Rendezvous was a finalist for the Philip K. Dick Award. Unfortunately, D. Alexander Smith has written little since the Marathon trilogy, including only one further novel (In the Cube), so the Marathon series has become unjustly neglected.

As for the cover art, John Berkey delighted in painting large gleaming spaceships, which were sometimes scientifically implausible (Do I see railings on that big ship? It is hardly ever a good idea to go check out the view from the balcony of your starship.) but always visually impressive.
Posted by Fantastic Reviews at 11:55 PM No comments: