Battle of the Books, Bracket Six, Second Semifinal :: Caliban's War by James S. A. Corey vs. Be My Enemy by Ian McDonald 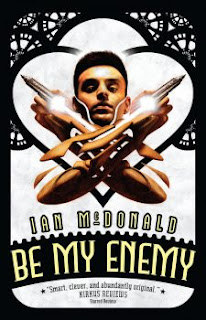 Our second semifinal in Bracket Six of the Fantastic Reviews Battle of the Books features Caliban's War by James S. A. Corey going against Be My Enemy by Ian McDonald. The book I (Aaron) most want to continue reading after 100 pages will reach the championship round.

Caliban's War: Orbit trade paperback, July 2012, 595 pages, cover art by Daniel Dociu. Caliban's War reached the Final Four by defeating Blood of the City by Robin D. Laws in the first round and London Eye by Tim Lebbon in the second round. Caliban's War is the second volume of James S.A. Corey's series The Expanse, following the Hugo-nominated Leviathan Wakes. James S.A. Corey is the joint pseudonym of Daniel Abraham & Ty Franck.

Caliban's War began with a bizarre creature attacking Earth and Mars forces on Ganymede. The creature is surely related somehow to the alien intelligence encountered in Leviathan's Wake. The opening 100 pages feature Jim Holden, the spaceship captain who was one of the main characters of Leviathan's Wake and who has been sent to Ganymede to investigate, and three new viewpoint characters: Bobbie Draper, a spunky soldier who survived the Ganymede attack; Chrisjen Avasarala, assistant to the undersecretary of executive administration on Earth, but actually pretty much the driving force behind the entire Earth government; and Prax, a researcher on Ganymede, desperately trying to find his daughter, who was abducted the day of the attack.

Be My Enemy: Pyr hardcover, September 2012, 263 pages, cover art by John Picacio. Be My Enemy reached the Final Four by defeating Besieged by Rowena Cory Daniells in the first round and No Peace for the Damned by Megan Powell in the second round. Be My Enemy is the second volume in Ian McDonald's Everness young adult series, after Planesrunner.

The two main characters of Be My Enemy are teenager Everett Singh and teenager Everett Singh. The two Everetts are from different alternate universes. One Everett is a crewmember of the airship Everness. In the opening 100 pages he works furiously to help the Everness escape an attack on a frozen alternate Earth. Meanwhile, the other Everett (Everett M) has been modified by a strange alien race, adapted into the ultimate soldier. Both Everetts are converging on airship-Everett's version of Earth, hoping to find Everett's father, who was a key figure in discovering the means to travel between alternate universes.

The Battle: Through 100 pages, I am enjoying the hell out of both these books. They both feature strong main characters, amusing side characters, interesting and colorful settings, and absorbing action. I remain very impressed with Abraham and Franck as a writing team, while Ian McDonald does YA far better than I might have guessed. Caliban's War has a slight advantage in that I've read the previous book, but so far Be My Enemy stands alone well——althought to McDonald's credit, it's made me very interested in going back and reading Planesrunner.

Still, the rules of the Battle of the Books require me to choose one book to continue reading. So I have to try to find some bases for preferring one, even though I have no complaints at all as to either novel. So let's see . . .

I love the dialogue in Caliban's War. Many of the characters are clever and witty, yet they all speak with distinctive voices. For example, there's a great scene in the second 50 pages of Caliban's War in which the authorities inspect Holden's ship. Because Holden is a bit of a celebrity, he tries to blend in as a crew member while his first mate Naomi poses as the captain. To Holden's astonishment, his mild-mannered engineer Amos suddently starts antagonizing the inspecting marines, asking whether the smooth crotches on the front of their spacesuits are anatomically correct. After the inspection, Holden confronts Amos:

"What. The. Fuck," he said through gritted teeth, "was that all about?"

"Amos here did just about everything he could to piss the marines off while you were gone. I'm surprised they didn't shoot him, and then me half a second later."

Amos glanced down at Holden's hand, still gripping his arm, but made no move to pull free.

"Cap, you're a good guy, but you'd be a shitty smuggler."

"The captain here was so nervous even I started to think he was up to something. So I kept the marines' attention until you got back." . . .

"You're a good captain, and you can have my back in a fight anytime. But you're a crap criminal. You just don't know how to act like anyone but yourself."

There's nothing wrong with the dialogue in Be My Enemy, but I'd especially hate to miss any of the upcoming conversations in Caliban's War.

The characters are also more varied in Caliban's War. I enjoy the contrast between chapters from the point of view of, say, Holden, who is self-confident but not at all arrogant, and Bobbie, who is a nice person and a good soldier but also a bit of a wreck after seeing her team torn to bits on Ganymede. In Be My Enemy, most of the narrative is from the point of view of Everett Singh, albeit two different Everett Singhs, whose personalities are beginning to diverge interestingly. Even though I like what McDonald is doing with the two Everetts, the variety of characterization in Caliban's War makes it a bit harder for me to put down.

Another distinction, which is unfair because it's subjective but there's no point pretending it doesn't exist, is that space opera spanning the solar system appeals to me a bit more than an alternate universe story. If you particularly like alternate universe tales, my guess is you will really enjoy Be My Enemy, but for me Caliban's War is the one I most want to continue reading.

Caliban's War advances to the championship round, where it will face After the Fall, Before the Fall, During the Fall by Nancy Kress.

Posted by Fantastic Reviews at 4:18 PM No comments: