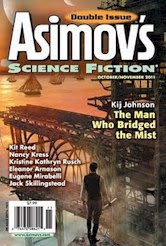 The science fictional aspects of this story mostly stay in the background, and some readers may find the tale lacking in drama, but I don't think it would benefit from extra explosions or action sequences. This a story of believable characters, who experience real confusion and pain, and I grew to like them very much.
Posted by Fantastic Reviews at 4:50 PM No comments: 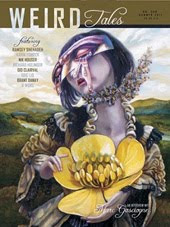 Ann VanderMeer has announced that she will no longer be editing Weird Tales. Apparently Marvin Kaye has purchased the magazine, intending to edit it himself.

I find this decision most unfortunate and, I must say, rather weird. Weird Tales had become a much more interesting magazine under Ann VanderMeer and her staff, an intriguing blend of high fantasy, dark fantasy, absurdism, even a little science fiction. It's had a gorgeous look with Mary Robinette Kowal as art director and interesting features under non-fiction editor Paula Guran. I wasn't the only one who was impressed -- the magazine just won its first Hugo Award two years ago.

VanderMeer says the first issue with Marvin Kaye as editor will be "Cthulhu-themed," which suggests the new direction will be a big step backwards. Perhaps there's still a large untapped market for H.P. Lovecraft and Robert E. Howard pastiches, although the ongoing struggles of Weird Tales to stay afloat since the 1950's suggest otherwise. But as much as I love the old pulp version of Weird Tales, it seems to me that writers have already had plenty of time to add to the Cthulhu mythos and explore Conan-style sword & sorcery. I suppose I shouldn't pre-judge what Marvin Kaye plans for Weird Tales, but his initial decision to jettison the current excellent staff does not bode well.

I just subscribed to Weird Tales for the first time this year, but now I highly doubt I'll be renewing that subscription.
Posted by Fantastic Reviews at 10:06 AM 3 comments:

Aaron's Story Recommendation of the Week :: Maddy Dune's First and Only Spelling Bee by Patrick O'Sullivan 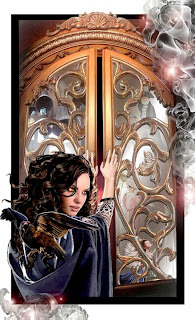 The story recommendation of the week is for "Maddy Dune's First and Only Spelling Bee" by Patrick O'Sullivan, from Writers of the Future, Vol. XXVII. The striking illustration is by Meghan Muriel -- you can see more of her amazing portfolio, along with news of her upcoming projects, at her Facebook page.

So I had decided the stories in Writers of the Future 27 should not be eligible for SROTW since, having spent nine days together with all the other WOTF27 authors, I am far too deeply biased to evaluate the book objectively. But I just can't help myself. This book include some of the best works of short fiction I've read in the past several years, and I want them included in the SROTW honor roll.

The most I can do is limit myself to three of the stories that particularly speak to me. This should not be taken to suggest anything at all negative about any of the other WOTF27 stories, every one of which is written at a very high level (excluding my own, which I can't comment on), and I am proud to appear alongside all of these talented (and super-nice) new authors. Two of them, Keffy Kehrli and Jeff Lyman, have already received story recommendations for non-WOTF pieces, and I suspect they all will before long.

So with that disclaimer, we begin with Patrick O'Sullivan's "Maddy Dune's First and Only Spelling Bee." "Maddy Dune" is Patrick O'Sullivan's first published story, but it is so imaginative and beautifully written, I am certain we will see much more outstanding work from him in the future (which hopefully he will tell us about at his web page).

Maddy Dune is a part-human, part-"spectral hound" girl adopted by human stepparents, who have been teaching her magic. She does not fit in well in polite society, but she hopes success in the big spelling bee will help. Maddy lives in a world where "spelling bees" have nothing to do with whether "i" comes before "e."

Most of the tale takes place on the stage of an auditorium, yet this is a tremendously vivid and engaging story. I enjoyed this piece from start to finish, and I read it to a group in my office who loved it as well. You need to find a copy of Writers of the Future, Vol. XXVII and read "Maddy Dune's First and Only Spelling Bee." And then, since you have the book anyway, why not check out some of the other stories?
Posted by Fantastic Reviews at 12:38 PM 4 comments: