Aaron's Take on the 2014 Hugo Nominees for Fiction

Today is the day to cast your ballots for the Hugo Award. Since this seems to be the year for block voting, if you don't know how to vote, I will gladly tell you . . .

Aaron's Ballot for Best Short Story
1. Sofia Samatar - Selkie Stories Are for Losers
2. John Chu - The Water That Falls on You from Nowhere
3. Rachel Swirsky - If You Were a Dinosaur, My Love
4. Thomas Olde Heuvelt - The Ink Readers of Doi Saket

To me, this is a group of three well-crafted stories and one brilliant one. Selkie Stories Are for Losers is elegantly written and in only a few pages creates a memorable main character, a young woman who is hurt and fearful after being abandoned by her mother but who is brave enough not to give up on love. At the same time, the story is an insightful commentary on an entire sub-genre of fantasy stories. This is the kind of piece the Hugo Awards were created to recognize.

In the novelette category, my vote goes to Aliette de Bodard, one of the finest young writers in the field. The Waiting Stars exemplifies her work's excellent craft and striking empathy. The other nominees are all good, until you get to the last one.

It would perhaps be more fun if Opera Vita Aeterna were more amusingly bad than it is. Instead, it reads like a lot of stories sent round for critiques in writers' groups: an amateurish effort by an author with some ability who doesn't seem to know yet how to construct an actual story. Opera Vita Aeterna could not have sold to any professional market in the field, and it's doubtful it could have sold even to a semipro, because it's dry and dull and simply does not tell a story. Only one real event takes place in the entire piece and, incredibly, it takes place offstage, even though the primary viewpoint character is there when it happens. Shame on the block of voters who stuffed this turkey onto the ballot. I suspect few of them even read it, yet they nominated it for reasons that have nothing to do with what the Hugo Awards should be about. (And because I do respect what the awards are supposed to be about, my reasons for rating it below "No Award" are unrelated to the author's political views or the offensive way he expresses them.)

The good news is Opera Vite Aeterna is the only one of the Correia slate of nominees that is not written at a professional level, so the embarrassment is not so deep as it might have been. The Brad Torgersen story in this category, for example, is a solid example of the Analog style of writing, even if that style isn't much to my tastes. (Brad, by the way, can transcend that style when he chooses, for instance in his brilliant novelette "Ray of Light.")

Snow White as a Western is a great concept, and no doubt many authors could have done it credit. But could anyone else have turned it into something as striking and captivating as Six-Gun Snow White? Catherynne Valente is a marvel.

I hate to say it, but this strikes me as a lackluster group of best novel nominees. Ancillary Justice is by far my favorite, the most original, the best written, and the most thought-provoking of the group. But then, if we're using thought-provoking as a criterion, Neptune's Brood is the only other nominee to try. The Correia and Grant novels are entertaining but have little to say. I choose Correia over Grant because of the writing quirks in Parasite that annoy me: multiple passages that don't advance the story (minor character drove me home and told me about her dog for five pages), and the fact that the main character's dialogue and the same person's first-person narration are in markedly different voices.

I rate The Wheel of Time below No Award, because it was a terrible precedent to allow that entire series on the ballot at once. I already feel badly for whichever friend of mine writes a brilliant novel in the near future and gets stuck on the Hugo ballot opposite the entire Discworld series. Here's hoping the rule gets clarified to keep multi-volume series off the ballot in future.
Posted by Fantastic Reviews at 4:45 PM 2 comments:

Battle of the Books, Bracket Seven, First Semifinal :: The Rise of Ransom City by Felix Gilman vs. River Road by Suzanne Johnson 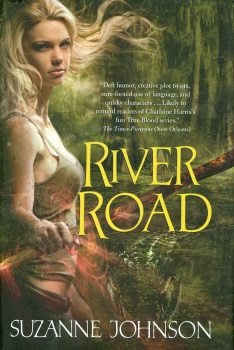 The Fantastic Reviews Battle of the Books returns with the long-awaited first semifinal in Bracket Seven, featuring The Rise of Ransom City by Felix Gilman going against River Road by Suzanne Johnson. The book I (Amy) most want to continue reading after 100 pages will reach the championship round.

The Rise of Ransom City is the fictional autobiography of self-educated inventor Professor Harry Ransom. It's set during the Great War between Gun and Line. Professor Ransom and his assistant, Mr. Carver, are traveling through towns in the Western Rim in a wagon carrying their Apparatus, giving demonstrations of Ransom's Light-Bringing Process and seeking investors.

After one of his shows, Professor Ransom meets two people walking down the road at night. The woman says that she's Miss Harper. The old man says he's her father. They are avoiding the patrols of the Line for some reason that Ransom is curious to learn. Ransom lets them travel with him and his assistant. (Those who have read The Half-Made World, will likely guess who these characters actually are.)

Professor Ransom demonstrates his lighting Process in the town of Kenauk. When started up, the Apparatus makes his glass lamps glow without any connecting wires. But unfortunately, the unreliable Process then somehow becomes unbalanced, the power surges, all the lamps shatter. Ransom and his assistant barely manage to pull the emergency lever on the Apparatus. Ransom says that he didn't know then how dangerous the Process could be. During the commotion, the Harpers leave town.

Sometime later, at a checkpoint, Ransom spots the Harpers surrounded by soldiers of the Line. Ransom claims the Harpers were his escaped servants and gets them released to him. A few towns further down the road, Ransom is terrified to see a photograph of Old Man Harper in a book about various notorious Agents of the Gun. Old Man Harper tells him that he quit the Gun.

Ransom fears for his life. Both the Line and the Gun are searching for "the Harpers" because they know the location of a supposed secret weapon. They reluctantly continue traveling together. Wolves attack them on the road. A dangerous Agent of the Gun, who is a barbarian giant, catches up with them in the town of White Rock. While Ransom is giving his illumination show, Old Man Harper tries to kill the Agent of the Gun by exploding buildings in town.

River Road:  Tor books, November 2012, 332 pages, cover art by Cliff Nielsen. River Road is the second book in the Sentinels of New Orleans series. River Road reached the semifinals by defeating Guardians of Stone by Anita Clenney and narrowly getting by The Doctor and the Rough Rider by Mike Resnick.

In River Road, after Hurricane Katrina historic undead and other preternaturals flooded into New Orleans. Drusilla Jaco, aka DJ, a Green Congress wizard, and her co-sentinel, the shapeshifter Alex Warin, are employed to handle paranormal problems. Historical undead pirate Jean Lafitte, who finds DJ attractive, has asked DJ to negotiate a truce between two clans of feuding merpeople living near the Mississippi delta.

The merman clan representatives, who are Cajuns and don't particularly like wizards, accuse each other of contaminating the contested waters. Over lunch a tentative territory agreement is hammered out. Afterwards, the Merman Rene Delachaise takes DJ, Alex, and Lafitte to the location of the bad water in his fishing boat. There they encounter the other merman, Denis Villere, by the body of a man who has been bloodily, ritually killed. Denis says he didn't do it.

DJ senses something about the murdered man using her magic, but to pinpoint it she unfortunately has to touch the gruesome body. The dead man was a wizard. The merman Rene gets water samples. Alex and DJ search the surrounding alligator-infested wetlands for evidence, and find clothes and the not only one, but two wallets of men wizards. DJ informs her employers, the Elders, then magically transports them the dead body.

DJ calls Letitia aka Tish, a fellow wizard and water engineer, to help test the water. Back in New Orleans, DJ discovers, using her elven staff, that the sampled water has some kind of nasty magical contamination.

The Battle:   This semifinal match-up features a steampunk fantasy set in an alternate world inspired by the Old West, and an urban fantasy book set in the New Orleans area. In the second fifty pages of each of these books, the plots thickened. In The Rise of Ransom City, the characters are now in imminent danger. In River Road, there's now a murder and a water contamination problem to solve.

In The Rise of Ransom City, I liked how the protagonist Professor Ransom filled in more details about each of the characters. Ransom himself comes off as a man who is both bombastic and naïve. His System of Exercises is eccentric. Mr. Carver, his untalkative assistant, has turned out to be more than he initially seemed. The Harpers have their various idiosyncrasies. Humorously, even their two horses are introduced.

The world-building and the meandering storytelling style makes this book interesting for me. I like that in this imaginary world the towns are not all the same, and there's still room for unknowns and unpredictable things.

In River Road, DJ is a modern woman with a sense of humor who wants to prove she can handle things, even when she falls knee-deep into the swamp mud. I found her to be a likable and believable, if somewhat harried, protagonist.

I liked that Jean Lafitte, the historical undead pirate, started showing more humanity. He got melancholy in his old stomping grounds and worried about DJ when he heard an alligator nearby. It was nicely odd that Lafitte was reading Eudora Welty. Earlier, Lafitte seemed mainly comic relief.

DJ's love life, and who she'll be dating, is an immerging subplot. There seems to be plenty of antagonism between the male characters surrounding DJ. Maybe if I read Royal Street, the first book in this series, I’d would have had more background.

Both these books held my interest, although they are quite different in subject and in tone. It was hard to stop reading them after 100 pages. They each featured supernatural content and conflict. But for Battle of the Books, I'm forced to choose between them. Only one book can go forward. In this match-up, I found that I'd rather continue reading the book which I felt took me further from today's reality, and which I considered to be more quirky.

The Rise of Ransom City advances to the championship round, where it will face either Quantum Coin by E. C. Myers or The Apocalypse Codex by Charles Stross.

To see the whole bracket, click here.
Posted by Fantastic Reviews at 8:18 PM No comments: