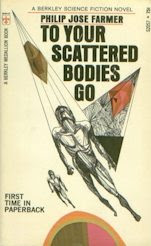 
This fascinating premise allowed Farmer to bring together whatever historical figures he found most interesting in a single story. Farmer explored the concept through four further volumes, collectively called the Riverworld Series. To Your Scattered Bodies Go won the Hugo Award for Best Novel of 1971.
Posted by Fantastic Reviews at 11:20 PM 1 comment: 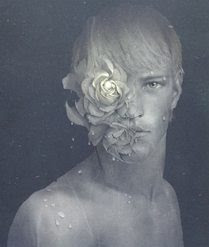 I first encountered Rachel Swirsky with her powerful story "The Debt of the Innocent" in Glorifying Terrorism. She has only been publishing fiction for some three years, but in that time has appeared in Weird Tales, Interzone, Subterranean and Fantasy among other publications, and has already built up a solid body of work. Check her out!
Posted by Fantastic Reviews at 4:47 PM No comments: 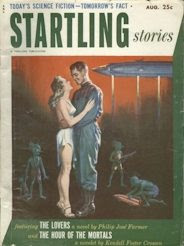 After the success of "The Lovers," Philip Jose Farmer went on to publish over 75 books. BOTW has featured him twice before, for Fire and the Night and Venus on the Half-Shell. Next week, we will continue our tribute to Farmer with his single most famous book.
Posted by Fantastic Reviews at 11:11 PM No comments: