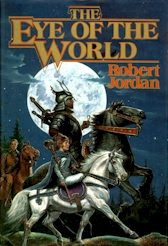 The Wheel of Time series was projected to cover twelve volumes (not counting the stand-alone prequel New Spring, the first appearance of which we will see next week), but only eleven have appeared to date. Knowing that his health was deteriorating from the rare blood disease amyloidosis, Rigney prepared detailed outlines of the final book in the series and had lengthy discussions with his wife, son, and other writers regarding its completion. It seems the Wheel of Time series will be finished, a fitting testimony that fantasy fans' devotion to Robert Jordan was mutual.
Posted by Fantastic Reviews at 10:48 PM No comments: 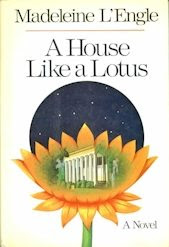 Unfortunately, next week's Book of the Week will pay tribute to another major fantasy author who recently passed away.
Posted by Fantastic Reviews at 9:52 PM No comments:

Aaron's Book of the Week :: A Wrinkle in Time by Madeleine L'Engle 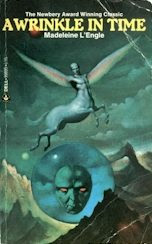 The Book of the Week is A Wrinkle in Time by Madeleine L'Engle, to honor Ms. L'Engle, who passed away last week at the age of 88. Madeleine L'Engle authored some 60 books, many but not all for young adults, and was the 1998 recipient of the Margaret A. Edwards Award for lifetime contribution to juvenile fiction.

She is best remembered for A Wrinkle in Time, winner of the Newberry Award for best young adult novel of 1962. A Wrinkle in Time takes Meg Murry and her brother Charles Wallace through a tesseract to other worlds, where they search for their lost father while learning much about themselves. A Wrinkle in Time has become an all-time classic, selling approximately ten million copies to date, and over the years has given a great many young readers their first introduction to science fiction.

A Wrinkle in Time has achieved this success despite being rejected by dozens of publishers (it was rescued from obscurity by John Farrar of Farrar, Straus & Giroux, who bought the book even though FSG did not publish juvenile fiction at the time), and despite often appearing on banned book lists. It ranked # 22 in the American Library Association' s list of the 100 most frequently challenged books of 1990-2000, apparently because some find it anti-Christian. This is a very peculiar charge, since L'Engle was a lifelong Episcopalian who wrote widely about her religious faith, served for over 30 years as the church librarian of the St. John the Divine Cathedral in New York, and was named an honorary Doctor of Sacred Theology by the Berkeley Divinity School in Connecticut. A Wrinkle in Time quotes from the Bible in support of the novel's theme of the importance of love and morality, and lists Jesus among the humans who have done the most to promote these causes and battle against darkness. One wonders if any of the people offended by the book actually read it.

My copy of A Wrinkle in Time is a worthless later paperback printing, but never fear. Next week we will see a Madeleine L'Engle signed first edition.
Posted by Fantastic Reviews at 5:17 PM 2 comments:

Labels: 1962, Book of the Week, Madeleine L'Engle, wrinkle in time 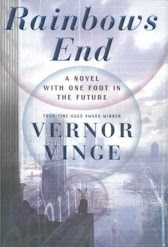 Next week we will pay tribute to the author of one of the all-time classic works of science fiction for young adults.
Posted by Fantastic Reviews at 10:45 PM No comments: