Aaron's Story Recommendation of the Week :: The Limits of Bioinformatics and the Problematic of Meaninglessness: A Case Study by David Hollander 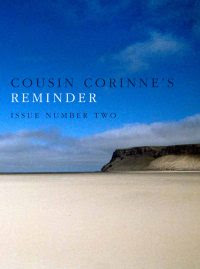 My story recommendation of the week is for David Hollander's "The Limits of Bioinformatics and the Problematic of Meaninglessness: A Case Study," from Issue #2 of Cousin Corinne's Reminder.

Cousin Corinne's Reminder is a mainstream literary magazine, but it also includes comics and photography, and if Hollander's story is any indication it is open to genre work. David Hollander, author of the book L.I.E. and various short fiction, is a mainstream writer who has occasionally flirted with genre. In particular, his story "The Naming of the Islands" from McSweeney's was reprinted in Best American Fantasy: 2008, edited by Ann and Jeff VanderMeer.

"The Limits of Bioinformatics" is unqestionably either science fiction or fantasy, depending on whether you deem its protagonist an alien or an angel. The unnamed protagonist (toward the end he is designated "TK421," a little Star Wars in-joke) arrives on Earth with a "time fractalizer," which allows him to live many years in a single day of his life span. Armed with a healthy supply of Wellbutrin, he is assigned "Experience Project 23DX9: The Problematic of Meaninglessness."

With each years-long day, the protagonist tries a new approach to the problem of meaninglessness. Monday he explores sex and love, marrying a woman named Penelope and living with her until exposure to him kills her. Tuesday he tries physics, Wednesday religion, Thursday art, and so on. Of course, he finds no easy answers.

The story is a nice framework for Hollander's philosophical exploration of what gives life meaning. It begins from a very cynical viewpoint. For instance, Penelope builds her life around a partner whom we know for a total fraud:

Penelope knew only his Mission Identity, and not the dynamic and multifaceted Explorer he truly was, and so what she loved was not him and what he was she could never love. This, he realized, was not particular to his case.

But later in the story, as the narrator struggles to find any other source of meaning, he looks back fondly on his faux-marriage, and the cynicism starts to melt away.

I was initially annoyed at Hollander's overtly tongue-in-cheek approach to his fantastic material, as if assuring mainstream readers that he doesn't really go in for that sci-fi stuff, but he won me over with his clever writing and his thought-provoking philosophical ideas. Genre and mainstream readers alike should find much to enjoy and to think about in "The Limits of Bioinformatics."
Posted by Fantastic Reviews at 10:26 AM No comments: 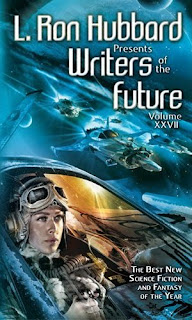 On Sunday, June 26, at 3:00 p.m., I'll be signing copies of Writers of the Future, Vol. XXVII at the Broadway Book Mall, at 200 S. Broadway in Denver. Appearing with me will be Erik Jean Solem, one of the winning illustrators; J Alan Erwine, local author whose new book is Red Moon Rising; and Laura Givens, Red Moon Rising's cover artist.

The event is hosted by Ron & Nina Else of Who Else! Books, who are the nicest couple you could ever hope to meet. Their little shop has hosted some of the best authors in the world -- Connie Willis was there last weekend, for instance, and Ken Scholes will appear there tonight -- but they are also kind enough to provide a forum for local wannabes like me.

So if you happen to be in Colorado and are interested in the Writers of the Future Contest, or you like to support local aspiring writers, or if you just want a free slice of cake (provided by the extremely generous, supportive folks at the Denver office of Dorsey & Whitney LLP), drop by and check it out!
Posted by Fantastic Reviews at 3:56 PM 5 comments:

Aaron's Take on the Russ Pledge

SF Signal ignited a debate with yesterday's "Mind Meld" post on the "Russ Pledge," which was Nicola Griffith's suggestion that everyone "pledge to make a considerable and consistent effort to mention women's work which, consciously or unconsciously, has been suppressed."

The debate stemmed from the fact that when The Guardian asked readers to name their favorite science fiction novels, the readers' list was dominated by male writers. (It was originally suggested that only 18 of 500 writers mentioned were women, but commenters on the SF Signal thread quickly discredited this calculation. A more plausible tally showed that 20 out of 160 authors named were women, or 12.5%.) Pro-Pledge commenters found this appalling and some accused any defenders of the status quo of sexism. Anti-Pledge commenters quickly took offense at being labeled sexist.

As is often the case with these Internet slugfests, I disagree with both sides.

The pro-Pledge side of the debate begins from an invalid assumption, that gender imbalance when people name their favorite books translates to existing gender bias in the SF/F field. When you ask people their favorite book, they will take that to mean their favorite book ever, which tells us very little about what they are reading and enjoying now. It is an unfortunate fact that for most of the history of the SF/F genre, there was a gender disparity among the authors. As a result, most of the all-time classics of the field were written by men. We may expect that lists of readers' all-time favorite works will reflect that disparity.

That does not necessarily mean that gender bias remains pervasive in the field. I suspect reasonable measures of readers' current favorite works would show far less disparity. For example, this year's Hugo ballot includes 10 works of fiction by women and 9 by men. The genre seems to have made commendable progress in this area.

Meanwhile, the anti-Pledge side of the debate is bristling at a suggestion that strikes me as entirely innocuous. What could be the objection to mentioning works by women when discussing science fiction and fantasy? You would have to circle pretty far out of your way to avoid doing that.

When I make story recommendations on this blog, I apply only one bias: I am particularly on the lookout for good stories by newer authors and from smaller publications, which readers might easily overlook. I pay no attention to the authors' gender (or to their race or religion or sexual orientation, etc). Yet to date I have given 39 story recommendations to stories by women, compared to 23 to stories by men (including a number to writers who are black, Asian, trans-gender, etc). There are just that many excellent new female writers out there.

So on the one hand I don't think it's instructive that my list of all-time favorite SF/F works is a male-dominated group (which it is, although it certainly includes some women authors, beginning with Ursula LeGuin, Octavia Butler, and Connie Willis). Nor can I see any difficulty with pledging to mention women authors when discussing SF/F, given that they are such a vital part of the field today.
Posted by Fantastic Reviews at 4:11 PM 2 comments: