Aaron's Story Recommendation of the Week :: Glass by Daryl Gregory 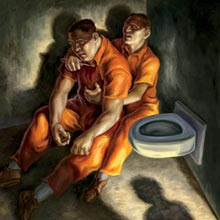 My story recommendation of the week is for "Glass" by Daryl Gregory, from the Technology Review, published by MIT (illustration for the story by Owen Smith). (Free registration is required to read the story.)

Daryl Gregory is one of science fiction's rising stars. For a lot more about him, you can read my interview with him, or my review of Pandemonium, his excellent new novel.

Like much of Gregory's work, "Glass" addresses issues of psychology and neurology. Recent research suggests that certain "mirror neurons," activated on observing actions of someone else, are strongly linked to empathy. In "Glass," scientists have developed a drug to stimulate these neurons and are testing it on sociopathic prisoners sorely lacking in emphathy. "Glass" is quite short and tightly written, yet manages to raise interesting practical and ethical issues about the effects of such a drug. Ending on a nice twist that I did not see coming, the story gives the reader its own little jolt of empathy.
Posted by Fantastic Reviews at 4:00 PM No comments:

Aaron's Book of the Week :: Scratch One by John Lange (Michael Crichton)

The Book of the Week is Scratch One by Michael Crichton (1942-2008), under the pseudonym John Lange. This is a very hard to find first printing, paperback original, published in 1967.

Scratch One was the second of eight novels Crichton published as by John Lange. The Lange books were sexy thrillers, commonly featuring half-naked women on the covers. Scratch One follows a lawyer who is mistaken for a secret agent while traveling through Europe, and before long he has to start acting like one.

While Michael Crichton's early work under pseudonyms was well-received in the mystery community -- A Case of Need as by Jeffery Hudson even won an Edgar Award for best mystery novel of the year -- Crichton's great commercial success came only when he switched to science fiction. This is perhaps surprising, as his anti-technological bent is atypical of the SF genre, but Crichton found a lucrative niche writing science fiction that appealed to non-SF readers.
Posted by Fantastic Reviews at 7:20 PM No comments:

Aaron's Book of the Week :: The Andromeda Strain by Michael Crichton

The Book of the Week is The Andromeda Strain by Michael Crichton, in honor of Mr. Crichton, who passed away last week at the age of 66.

Michael Crichton was a Harvard-educated doctor who found fame and fortune as a writer. His books have sold well over 100 million copies, and an even greater number have seen the films and television shows he wrote, directed, or produced. Crichton enjoyed success with suspense stories set in the corporate world (Rising Sun, Disclosure), historical fiction (The Great Train Robbery, Eaters of the Dead [filmed as The Thirteenth Warrior]), and medical dramas (Five Patients, TV's ER), but throughout his career science fiction has been his bread and butter. Among other SF premises, Crichton has given us a deadly disease from outer space (the BOTW), berserk robots and nanomachines (Prey, the film Westworld), an alien spaceship on the ocean floor (Sphere), cloned dinosaurs (Jurassic Park, Lost World), a time travel story (Timeline), and a politically charged thriller about global warming alarmism (State of Fear, famously denounced by Al Gore in Congressional testimony).

The Book of the Week is the first paperback printing of The Andromeda Strain (1969). The story was adapted to film in 1971, and again as a miniseries in 2004. The Andromeda Strain is often described as Crichton's first book, but in fact, Crichton had previously published a mystery novel and a series of sexy thrillers under pseudonyms. You will see one of those next week.
Posted by Fantastic Reviews at 12:02 PM No comments:

I just looked over the story recommendations I've made for the first couple months of this new feature, and I discovered that of the eight different authors I've picked so far, seven have been women. This was not at all deliberate. I have just been tossing out stories I liked as I came across them, and the authors' gender never crossed my mind.

I believe this is just a statistical oddity, not a reflection of any unconscious bias I have in favor of women authors. Certainly if I were to put together a list of my all-time favorite writers it would be a male-dominated lineup, although Ursula LeGuin and Connie Willis and Octavia Butler would feature prominently.

Still, it demonstrates how many outstanding female authors there are in the field today. As more of these women work their way up the ranks, I suspect the recent underrepresentation of women in major award nominations will become a thing of the past.
Posted by Fantastic Reviews at 4:55 PM No comments:

Times Literary Supplement Gets It Right

The New York Times Book Review continues to subject us to übertwit Dave Itzkoff, the science fiction reviewer who delights in expressing disdain for the field about which he knows so little -- just this past Sunday he sneered at "the 25-cent bin of genre fiction."

Meanwhile, the Times of London shows its junior how it's done, printing this review by Tom Shippey of Anathem by Neal Stephenson.
I haven't read Anathem so I won't comment on Shippey's conclusions about the novel. (I suspect I would have a less positive reaction. I am a slow reader, so tend to be unforgiving of authors as long-winded as Stephenson has become.)

Whatever you think of Stephenson's recent work, SF/F readers have to love this description of the concerns of modern science fiction:

One of the great things about (much) science fiction is that its authors really mean it. They do think, for instance, that the human species is doomed to exhaustion and dieback if it does not get itself into space, and soon, while we have the technology and the resources, a window of opportunity shuttered by NASA’s inept bureaucracy. They really do believe that humans could be educated to their full potential and far beyond the levels reached by the tick-the-box grading systems of modern colleges, if we exploited available computer- and nano-technology. To them (some of them) mathematics is not just fiddling with abstractions but a guide to ultimate reality. Some of them think we need never die. In every case, though, there is strong awareness of the obstacles in the way of converting possibility to hard fact, some of them theoretical or technological, but even more of them social, financial, attitudinal.

Our future is upon us, and science fiction is one of the few fields encouraging folks to consider seriously what lies ahead. Shippey observes that "much science fiction, like Stephenson’s, has a missionary quality; its purpose is to get people thinking seriously about serious matters, not the trivia that fill modern versions of the unexamined life."

Shippey approves of this focus, although he is skeptical about how many readers out there can tackle what Stephenson is up to. Yet there are obviously many readers who feel up to the challenge -- Anathem hit #1 on the best-seller list compiled by that rag that employs Dave Itzkoff.

It is not surprising that Tom Shippey should engage in a thoughtful and respectful discussion of science fiction and fantasy. Shippey has won the World Fantasy Award and been a Hugo nominee for his Tolkien scholarship, and under the pseudonym John Holm he co-authored a trilogy of alternate history novels with Harry Harrison, beginning with The Hammer and the Cross. But for the Times of London to provide a forum for this discussion is encouraging indeed.
Posted by Fantastic Reviews at 9:31 AM No comments:

Aaron's Story Recommendation of the Week :: The Nymph's Child by Carrie Vaughn 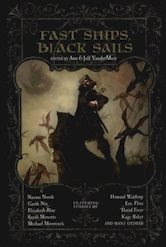 My story recommendation for this week goes to "The Nymph's Child," a short story by Carrie Vaughn.

Carrie Vaughn has found great success in the past three years with her series, beginning with Kitty and the Midnight Hour, about a werewolf talk radio host. Even if you have wearied of werewolves and vampires, "The Nymph's Child" demonstrates that Vaughn is too good a writer to disregard.

"The Nymph's Child" is the bittersweet story of Grace Lark, who disguised herself as a man in order to sail, and became first mate and lover of the legendary pirate Captain Alan. But when their ship was captured and her officers executed, Captain Alan ordered Grace to live. It is fitting that the seafaring adventure is all told in flashbacks, for as we see, Grace's greatest acts of heroism come after the adventures are over.
Posted by Fantastic Reviews at 9:38 PM No comments:

Aaron's Book of the Week :: Dance Hall of the Dead by Tony Hillerman

The Book of the Week is Tony Hillerman's Dance Hall of the Dead (1973), in honor of Mr. Hillerman, who passed away last week at the age of 83. Tony Hillerman was a decorated combat veteran of World War II, a successful journalist for some 15 years, a professor at the University of New Mexico for over 20 years and, my godparents tell me, a great guy to play poker with. But he will always be best remembered as the author of the Leaphorn and Chee mysteries. Hillerman penned 18 novels following Leaphorn and Chee, Navajo tribal police officers. These books were excellent mysteries, but perhaps even more important for their insights into Native American culture.

This is the first paperback printing of Dance Hall of the Dead, which won the Edgar Award for best mystery novel of the year, the first of Hillerman's many awards, including being named "Grand Master" by the Mystery Writers of America in 1989. Second in Hillerman's series of Navajo mysteries, Dance Hall of the Dead starred Joe Leaphorn, but Jim Chee hadn't come along yet. The Leaphorn and Chee mysteries have been adapted to film in The Dark Wind (which starred Lou Diamond Phillips and was widely disliked by Hillerman fans) and to television in three feature-length movies in the PBS series Mystery! (generally better received).

Hillerman did write a few books outside the Leaphorn and Chee series, but I don't believe he ever wrote any science fiction or fantasy (although one could argue that some of the Leaphorn and Chee books have a fantasy element, since they involve reports of Navajo witchcraft or ghosts). Next week's Book of the Week will honor a recently departed author who regularly hit the best-seller lists even though he did write science fiction.
Posted by Fantastic Reviews at 6:49 PM No comments: