Final Writers of the Future Update

I've been at the Writers of the Future workshop all week, which has been great fun and a terrific learning experience. K.D. Wentworth and Tim Powers have done a wonderful job as the primary instructors, and multiple outstanding authors have guest lectured (and regaled us over drinks and at last night's picnic) -- including Kevin J. Anderson, Doug Beason, Gregory Benford, Eric Flint, Nina Kiriki Hoffman, Yoji Kondo (aka Eric Kotani), Rebecca Moesta, Mike Resnick, Kristine Kathryn Rusch -- with still more to come. This is such a remarkable experience, any aspiring authors out there owe it to yourselves to take a shot at this contest.

My fellow winners are a tremendously talented group, not to mention a bunch of very nice folks. It was a huge thrill to see the illustration for my story done by Illustrators of the Future winner Frederick Edwards, which is just perfect. And Cliff Nielsen's cover art for the anthology is outstanding.

If any of you are bored and want to see some of the award ceremony, it will be Sunday at 6:30 p.m. West Coast time, streamed live at the Writers of the Future web site. (There's also a blog there with many photos and with Jordan Lapp & Tim Powers scurrilously questioning my integrity.)
Posted by Fantastic Reviews at 7:56 PM 2 comments:

Aaron's Story Recommendation of the Week :: The Trojan Girl by N.K. Jemisin 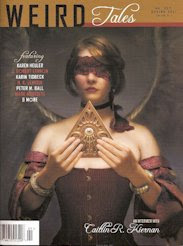 The story recommendation of the week is N.K. Jemisin's "The Trojan Girl."

This is our second straight SROTW to come from the Spring 2011 issue of Weird Tales, which has held to a very high level of quality under editor-in-chief Ann VanderMeer and her excellent staff, including Mary Robinette Kowal as art director. One thing I like about the current staff's approach to Weird Tales is the diversity of stories they are publishing, including high fantasy, dark fantasy, absurdist work, even a smattering of science fiction.

"The Trojan Girl" starts out as a werewolf tale, but soon shapeshifts into a science fiction story about rogue artificial intelligences. The protagonist Meroe is the co-leader of a pack of programs, which inhabits the "Amorph," a future version of the Internet using direct brain interfaces. The story tells of their hunt for a new inhabitant of their world, whose astonishingly pure code they hope to scavenge. As the story title suggests, there is more to her code than they realize.

Jemisin's focus is on the mood of the piece, not the underlying technologies. She tells us only fleetingly of the nature of this electronic wolfpack, but it is enough to satisfy. Jemisin does a marvelous job of generating sympathy for her powerful yet childlike characters:

In the Amorph, there were times that passed for night--periods when the Amorph had an 80% or greater likelihood of stability, and they downclocked to run routine maintenance. In these times Meroe would lie close to Zoroastrian and touch her. He could not articulate what he craved, but she seemed to understand. She touched him back. Sometimes, when the craving was particularly fierce, she summoned another of their group, usually Neverwhen. They would press close to one another until their outer boundaries overlapped. All their features, all their flaws, they shared. Then and only then, wrapped in their comfort, would Meroe allow himself to shut down.

Sometimes he wondered what humans did, if and when they had similar needs.

N.K. Jemisin was a Hugo nominee last year for her short story "Non-Zero Probabilities," and is on this year's best novel ballot for The Hundred Thousand Kingdoms. I like "The Trojan Girl" even better than those award-nominated works.
Posted by Fantastic Reviews at 11:49 AM No comments:

My story recommendation of the week is for "Augusta Prima" by Karin Tidbeck, from the Spring 2011 issue of Weird Tales.

Karin Tidbeck is a Clarion graduate who has published various work in Sweden, but only recently turned to writing in English. "Augusta Prima" is the first story of hers I have seen, but several others are forthcoming. It is clear from "Augusta Prima" that Tidbeck has a wonderful facility with the English language.

Title character Augusta is a denizen of a very strange and decadent fairy world. The story begins with her participating in a most violent version of croquet. She stumbles upon a human corpse, takes the man's gold watch, and soon begins to ask very uncomfortable questions, such as: Why do the hands of the clock move when there is no time in Augusta's universe? She brings her questions to a powerful djinneya:

"I would like to know the nature of time," Augusta said. "I want to know why time can't be measured properly here, and why everything moves around."

The djinneya laughed. "Your kind doesn't want to know about those things. You can't bear it."

The djinneya raised her thin eyebrows. "Normally, you are tedious creatures . . . I believe this is the first time one of your sort has asked me a good question. It's an expensive one, but I shall give you the answer. If you really are sure."

"I have to know," said Augusta. "What is the nature of the world?"

The djinneya smiled with both rows of teeth. "Which one?"

It is apparent from early in the tale that Augusta's curiosity may prove dangerous, but the turns in the story are unpredictable and interesting.

This is quite a short piece, but I enjoyed it very much, and I look forward to much more of Tidbeck's work.
Posted by Fantastic Reviews at 12:27 AM No comments: