Amy's bookshelf :: A Clash of Kings in Russian 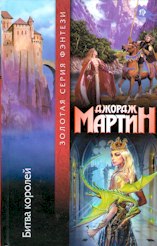 This is one of the most unusual books in my collection. The Russian title is битва королей (Battle of Kings). It’s A Clash of Kings by George R.R. Martin translated into Russian. It's a small sized hardcover, approximately 8" x 5 1/4" x 1 1/4", with 764 pages, published in 2001.

I also own copies of Игра престолов (A Game of Thrones) (you can see that book here), and Буря мечей (A Storm of Swords). They are a matching set of three books.

I can't actually read these books. My dad, during the Cold War in the 1960s, took classes in Russian. He tried, mostly unsuccessfully, to teach me some words and the Cyrillic alphabet. I still have his Russian dictionaries and text books.

Here's the first sentence from the back cover of the book:
Перед вами - величественное шестикнижие <<песнь льда и огня>>.
which translates as:
Before you - a majestic Hexateuch << A Song of Ice and Fire >>.

Posted by Fantastic Reviews at 12:15 PM No comments: