Aaron's Story Recommendation of the Week :: Advertising at the End of the World by Keffy R.M. Kehrli

I am back to reading short fiction, and my story recommendation for this week is Advertising at the End of the World by Keffy R.M. Kehrli, from the September 2009 issue of Apex Magazine.

"Advertising at the End of the World" begins with perhaps the best opening line I have seen this year:

Five years after her husband died, two years after she moved to a cabin in Montana, and six months after the world ended, Marie opened her curtains to discover her front garden overrun with roving, stumbling advertisements.

The "advertisements" are programmed humanoids, determined to keep pitching the products of vendors long since wiped out by plague. The initial image of walking advertisements mindlessly tromping through survivor Marie's flower garden has a whimsical feel, but Kehrli soon turns the story in a wistful direction, as the advertisements remind Marie of everything she has lost.

Keffy Kehrli only began selling fiction in early 2009, but he has already published stories in Apex, Talebones, and Sybil's Garage, with more forthcoming in Electric Velocipede and Fantasy. Apex, a print magazine turned top-notch e-zine, is notable for publishing up-and-coming authors like Ekaterina Sedia, Theodora Goss, Lavie Tidhar, Eugie Foster, Jennifer Pelland, and Aliette de Bodard. If "Advertising at the End of the World" is any indication, Keffy Kehrli belongs among such company.
Posted by Fantastic Reviews at 1:57 PM No comments: 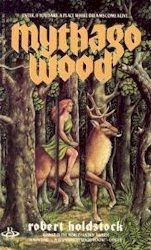 The featured book is Mythago Wood by Robert Holdstock. This post is a tribute to Holdstock who died recently at the age of 61 after battling a severe E. coli infection.

Holdstock was a British fantasy writer. He is best known as the author of the Mythago Cycle or Ryhope Wood series, the first published book of which is Mythago Wood (1984).

Mythago Wood features an ancient Celtic wood in England where archetypal characters from myths and legends become flesh and blood. These denizens of the wood of called mythagos. Ryhope wood appears to cover only a small area, but is vast inside. Time runs slower in the wood as compared to the outside world.

Of Robert Holdstock's works, I've only read Mythago Wood and its indirect sequel, Lavondyss. I found both books, which are different in tone, to be memorable and impressive. Other books in Mythago Cycle, in order of publication but not necessarily in order of events, are The Bone Forest; The Hollowing; Merlin's Wood; Gate of Ivory, Gate of Horn; and Avilion.
Posted by Fantastic Reviews at 11:23 PM No comments: