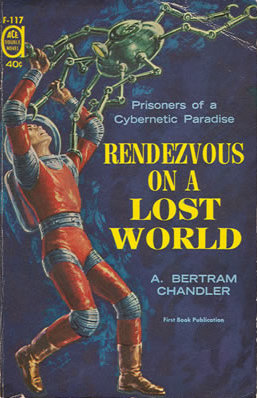 
This is another book from my stack of vintage Ace Double books. I decided to feature Rendezvous on a Lost World because it has, in my opinion, a striking science fiction cover, a spaceman confronting a smaller, spider-like robot. Is this one of the "giant mechanical insects" mentioned in the blurb? My copy of this book is in very good condition. As the last book, the pages have yellowed and the print font is small. The cover graphic was copied from A. Bertram Chandler's website, which contains good information about the author. I haven't read this science fiction book, so I can't say more. Perhaps something from my bookshelf to add to my to-be-read list?
Posted by Fantastic Reviews at 7:09 PM No comments: 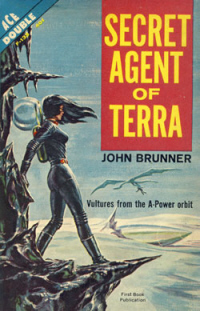 
I randomly pulled Secret Agent of Terra from a stack of vintage Ace Double books. The shown book cover graphic is from Wikipedia, unfortunately my copy is a bit more worn. The pages have yellowed in the over 55 years since it was published. It's not many pages long but the print font is small. I haven't read this science fiction book, so I can't say more. Although digging out "radioactive resources", as mentioned in the description, sounds dangerous. I'm featuring this book because I thought the cover was interestingly retro looking. Perhaps something from my bookshelf to add to my to-be-read list?
Posted by Fantastic Reviews at 12:20 AM No comments: