Writers of the Future

This blog generally focuses on promoting other authors' fiction, but today I hope you'll forgive me a bit of self-promotion.

My story "The Dualist" is a winner of the Writers of the Future contest!

The star-studded judging panel of Tim Powers, K.D. Wentworth, Jerry Pournelle, and Doug Beason picked my story as third-best of the Second Quarter 2010, out of the untold boxes of submissions they get. As one of the top three, "The Dualist" will be in Writers of the Future, Volume XXVII next year, and I will be invited to a week-long writing workshop with Powers, Wentworth, and others.

To have something in common with all these amazing writers is a huge thrill. It's also strangely unsettling. I have the impression that many of the writers who enter the Writers of the Future contest are young, energetic people determined to become professional authors. I, on the other hand, am a middle-aged fellow who has never thought seriously of a career in fiction, because I never believed I had the talent. I've never even entered the WOTF contest before, figuring that none of my previous feeble efforts would have a chance.

I have always had an absurd hero-worship of professional authors, and so never dared to think that I could do what they do. But in the past couple years I've had the pleasure of meeting some of the local Colorado writers like Paolo Bacigalupi and Ed Bryant, and as much as I admire their work, they are actually not fifteen feet tall. They are very friendly and interesting people, but do not seem superhuman at all (but then, I haven't checked Paolo's closet for capes). I still don't imagine I have it in me to write quite like Paolo or Ed -- who does? -- but somehow it's feeling less ridiculous to think of at least publishing some stuff in the same field. I am looking forward to this workshop next year more than I can say.

Congratulations to my fellow winners for this quarter, Patty Jansen and Ben Mann (both Australian), and the winners for the first quarter, Brennan Harvey, David D'Amico, and Ryan Harvey (no relation). Good luck to everyone in the third and fourth quarters of the contest. Hope to see you next Spring!
Posted by Fantastic Reviews at 9:17 PM 6 comments: 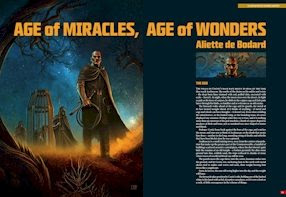 "Age of Miracles, Age of Wonders" is set after the time of the Aztecs' human sacrifices, but it prompts us to wonder what sacrifices we are still making, for which we will never be able to atone.
Posted by Fantastic Reviews at 9:51 AM No comments: 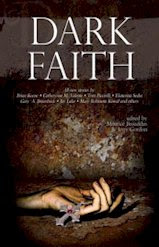 Ekaterine Sedia's first novel According to Crow flew under the radar, but her next two, The Secret History of Moscow and The Alchemy of Stone, have been very well received. Her latest novel, The House of Discarded Dreams, is due out from Prime Books in November. Sedia was raised in Moscow, but you would never know it from her wonderfully elegant writing style, of which "You Dream" is a terrific example.
Posted by Fantastic Reviews at 11:44 AM No comments: