Battle of the 2012 Books, Bracket Eight, Second Round :: Untimed by Andy Gavin vs. Libriomancer by Jim C. Hines 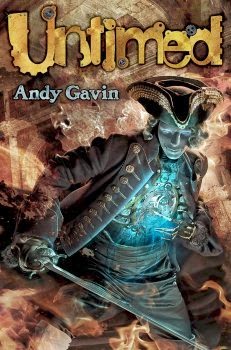 After getting distracted for a while with the Hugo nominees, we return to the Fantastic Reviews Battle of the Books. Today's match-up, our third in the second round of Bracket Eight of the Battle of the 2012 Books, has Untimed by Andy Gavin going up against Libriomancer by Jim C. Hines. The winner will be the book I (Aaron) most want to continue reading after 50 pages.

The first 25 pages of Untimed introduced us to Charlie, a boy nobody seems to notice, not even his mother. Charlie followed a clockwork man through a strange rift into 18th Century London. He quickly befriended a girl named Yvaine, who explained that Charlie and Yvaine are time travelers. Unfortunately, males can only travel to the past (although this is suspect — there are strong suggestions that Charlie's father has traveled to the past and returned). In the second 25 pages, Charlie meets Yvaine's group of companions, young pickpockets and ruffians straight out of Oliver Twist. Charlie ends up in a fistfight with the leader of the group, Donnie, but the whole thing is more ritual than conflict, and it seems the group will accept Charlie.

The hero of Libriomancer is Isaac Vainio, book-lover and SF/F fan and libriomancer. Isaac can reach into a book he has read and pull out objects described in them. He works as a librarian in the service of a secret magical society called the Porters. In the first 25 pages, he defended his library in Michigan's Upper Peninsula from vampires, with help from his pet fire-spider Smudge and a dryad named Lena. In the second 25 pages, we learn that a huge battle has erupted among the world's magical folk, and the world's first and greatest libriomancer, Johannes Gutenberg, has disappeared. Isaac meets up with Deb, a powerful libriomancer from the Library of Congress, but Isaac and Deb are not sure they can trust each other.

The Battle: In this battle we have a time travel story targeted at young adults and a contemporary fantasy targeted at book lovers. Through 50 pages, both authors are having fun setting up their storylines and both have done a nice job of pulling me into the tale.

After a fast-paced first section, the second 25 pages of Untimed slow down a bit to let us get to know the characters. The best part of this section is an unexpected detail about Charlies' potential love interest Yvaine:

"Thanks, Nancy," she says, taking the bundle from the lady.

Only candles light the cramped space, but now I can see that Yvaine's holding a baby. It opens and closes its little mouth like a guppy.

She tugs open the drawstring of her shirt and presses the infant close.

I'm not sure what surprises me more — that she's a teen mother or that I just saw my first glimpse of tit.

I like that Yvaine is a young mother, and the time travel framework sets up obvious possibilities that Charlie could end up the father of that child or maybe the child himself. Unfortunately, this passage also exemplifies my biggest problem with Untimed so far: in a first-person young adult story, the voice is critical; the narrator must sound like a teenager. Charlie in particular is portrayed as a painfully shy and awkward young man, except he often sounds instead like a middle-aged wiseass. "My first glimpse of tit"? Really? For a shy and awkward young man (and believe me I was one), seeing a pretty woman's chest for the first time is an occasion for reverent joy not a smart-alecky quip. Several times through the second section of Untimed, the narrator did not sound to me like the character he is supposed to be.

Meanwhile, I have no such quibbles with the writing in Libriomancer and I am having all kinds of fun with the story premise. In the second section, Isaac is subjected to an interrogation using a truth serum SF fans will recognize as fast-penta from Bujold's Miles Vorkosigan series. He pulls an herb out of Homer's Odyssey to cure the resulting headache. He then uses a personal shield generator from Dune to stymie an attack by machine gun. He obtains further help for his defense from The Hitchhiker's Guide to the Galaxy and Starship Troopers, but the assailant responds with chlorine gas from a World War I history book. Luckily, the magic potion from the The Lion, the Witch, and The Wardrobe is up to that challenge.

Jim Hines is having a lot of fun writing a book incorporating all the other books he loves to read. If you love to read them too, you should enjoy this one tremendously.

Libriomancer advances to the semifinals to take on either A Pretty Mouth by Molly Tanzer or Blood and Feathers by Lou Morgan.

Posted by Fantastic Reviews at 10:35 PM No comments: