100 Ghost Soup by Robert Chansky vs. Merchant of Alyss by Thomas Locke :: Battle of the 2016 Books, Bracket One, First Round, Battle 8 of 8 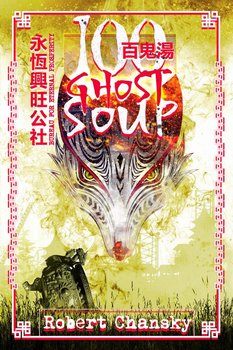 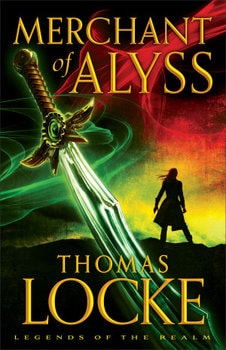 The eighth and final first round match in Bracket One of the Battle of the 2016 Books features 100 Ghost Soup by Robert Chansky taking on Merchant of Alyss by Thomas Locke. The winner will be the book I (Aaron) most want to continue reading after 25 pages.

100 Ghost Soup: Curiosity Quills trade paperback, 268 pages, September 2016, cover art by Eugene Teplitsky. Seventeen-year-old Bei Jimo has lived his whole life in a Beijing orphanage. He only recently discovered that he was never adopted because of a clerical error in his paperwork that falsely informed prospective parents that he was born without hands. Now, inexplicably, just a month shy of his majority, someone far to the north, nearly to Mongolia, has offered to adopt him. He takes the train to the ghost town of Dongxi, a modern city that was abandoned during construction, where he is greeted by a peculiar man calling himself Mr. Vulpin.

100 Ghost Soup is the first novel by Robert Chansky, whose work I will try to judge as impartially as I can even though he is a member of my writing group. (Protests may be filed with the Fantastic Reviews home office in Buenos Aires.)

Merchant of Alyss: Revell trade paperback, 354 pages, January 2016, cover design by Kirk DouPonce. Merchant of Alyss (pronounced ah-LISS) is the second volume in the Legends of the Realm series. The story begins with an enigmatic wizard appearing and casting spells toward a house, but he is defeated by the house's automatic magical defenses. Later we join our protagonist Hyam and his wife Joelle, whose house it apparently was, as they inspect a shipment of scrolls obtained through mysterious sources. It seems that Hyam has lost his magical powers because his "orb" was shattered at the end of the last book (Emissary). But these scrolls contain writings that only Hyam can see, which allow him to cast a powerful spell without any orb.

Thomas Locke writes epic fantasy and techno-thrillers, as well as historical and contemporary fiction (often with religious elements) under the name Davis Bunn.

The Battle: Through 25-pages, Merchant of Alyss is very standard, run-of-the-mill epic fantasy. Let me emphasize that I do not mean that to sound derogatory. I have 5,000 books in my home. Some are brilliant masterpieces, but sure as hell not all 5,000. I have shelves full of old pulp novels and space operas and swords-and-sorcery adventures, and many is the time I pick up one of those books and open it because I'm in the mood to read something that is just what I'm expecting. It seems to me that's what Locke is going for here: fairly light-hearted adventure with swordfights and wizards tossing about balls of light, and the reader knows just what to expect.

Perhaps I am misperceiving where Merchant of Alyss is headed. For example, early on we see that Hyam greatly misses the ability to do magic, before he stumbles across a library of spells that he can still use. Perhaps the intent here is to show Hyam's descent into darkness because the magic he is doing has addictive properties. But I don't think so. I think Locke just wants the reader to share Hyam's excitement at being able to do magic again. And that's cool. In fact, that kind of predictable adventure story is sometimes preferable to a book where the author is going for brilliant and failing.

Unfortunately for Locke, in 100 Ghost Soup, Robert Chansky is aiming for something strange and different and enchanting, and through 25 pages, he is not failing at anything. Bei Jimo is a sympathetic character whom life has dealt a crappy hand. But when someone finally is willing to adopt him at the eleventh hour, he breaks the rules to jump on the opportunity. When his journey into the far north takes him to a deserted city, the train conductor insists that the train will not stop there but, ominously and much to the conductor's surprise, it does.

The train station is utterly deserted, but for a cart busily boiling water for tea. But when Bei Jimo tries to brew tea, a hidden wire in the cart pricks him and a few drops of blood fall into the cup. At that point, Mr. Vulpin appears. He seems disappointed that Bei Jimo actually has hands, but still insists on drinking the tea as is and promptly signing the adoption papers, at which point everything instantly changes:

The sable man's smile acquires a similar warmth that I cannot pin down to tea, or to him, or—

Or this place. For now, the station is transformed.

Men and women stand around us. A crowd of fifty or more. Above their heads are red paper banners, streamers, all wishing luck, long life, happy birthday.

Some are as solid as the sable man and I; some I can see through, and some at the edges are little more than smoke. The children of smoke hold the hands of parents. All look at us. I leap to my feet, hoping to run from this scene. Sixty years of official disdain for superstition has failed to stamp out a healthy thousand-year-old fear of ghosts. For that is what they are.

"Welcome to the family," says Mr. Vulpin, with a grin as wide as his teeth.

For me, this is a compelling opening, and 100 Ghost Soup is impossible to put down after the first 25 pages.

100 Ghost Soup advances to the second round to face A Shadow All of Light by Fred Chappell.

To see the whole bracket, click here.
Posted by Fantastic Reviews at 12:25 PM No comments: