Aaron's Magazine of the Week :: Astounding Science Fiction May 1950 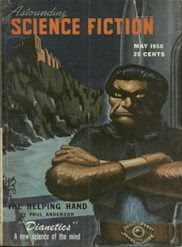 The Magazine of the Week is the May 1950 issue of Astounding Science Fiction. This issue was printed not long after Astounding switched from pulp to a digest format. Because they are more durable, old digest magazines are generally less valuable than the pulps; nevertheless, the Magazine of the Week is a very collectible issue of Astounding, because it contains the first appearance of the new "science" of Dianetics, the basis for L. Ron Hubbard's Church of Scientology. All of Hubbard's early writings are prized collectors' items now, sought both by SF collectors who view Hubbard as a curiosity and by adherents of his religion, who seem to find it charming that Hubbard used to write stories oddly similar to what he later revealed as the literal truths of the universe. (This just never ceases to boggle my mind.)

When he published this first Dianetics article in Astounding, the magazine's editor John W. Campbell, Jr. called it "one of the most important articles ever published" and predicted that L. Ron Hubbard would win the Nobel Peace Prize. Campbell, who was always eccentric, was by this time becoming increasingly fascinated with bizarre pseudoscientific concepts such as the "Dean Drive" (don't ask). This was an unfortunate turn to his career. As mentioned in the May 1, 2006 Magazine of the Week, Campbell was the driving force behind the "Golden Age" of science fiction. As editor of Astounding, he discovered and/or developed most of the top SF writers from the late 1930's through the mid-1950's. The Magazine of the Week, for example, includes such all-time greats as Jack Vance, Poul Anderson, and A.E. van Vogt. Even before he began editing Astounding, Campbell was influential on the field through his own writing. Next week's Book of the Week will be a very hard to find collection of Campbell's fiction featuring his most famous story, which was first published in 1938, then adapted into a classic film in 1951 and remade in 1982.
Posted by Fantastic Reviews at 11:46 PM 5 comments: 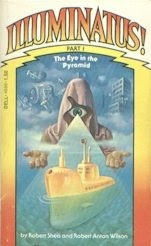 
(Note from Amy, the webmaster: The Denver Science Fiction & Fantasy Book Club read this book nearly five years ago. Aaron had some things to say about The Eye in the Pyramid back then, too)
Posted by Fantastic Reviews at 10:10 PM No comments: 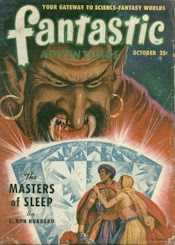 Next week's Magazine of the Week will be the magazine in which L. Ron Hubbard first unveiled his new science of Dianetics. Naturally, it was a science fiction magazine.
Posted by Fantastic Reviews at 11:08 PM No comments: 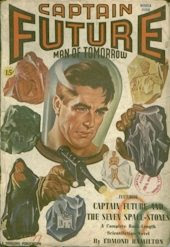 We are nearing the end of our introduction to the pulp magazines. There are many other genres and important authors from the pulp era we have yet to discuss, but I have to cut this history off somewhere. However, there is one more figure from the pulps I cannot resist mentioning. Next week's Magazine of the Week will feature one of the most prolific of the pulp authors, someone who certainly was not the best of the pulp writers but may end up having the greatest impact, because he founded a religion that has hundreds of thousands of followers today.
Posted by Fantastic Reviews at 10:58 PM No comments: