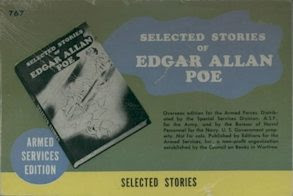 The peculiar sideways format of ASE books resulted from the fact that the American publishers who agreed to make these books at well below their usual profit margins as part of the war effort (at the request of Army Librarian Ray Trautman - any relation?), used presses designed for magazines. These presses required wide paper, which then had to be cut into squat little rectangles in order to be small enough to fit in a G.I.'s pocket. Why didn't they have paperback presses, you ask? Because mass-market paperbacks were still a very new concept in the early 1940's - indeed, the success of the ASE program helped the idea to catch on in the late 40's and early 50's. Next week's Book of the Week will be the very first mass-market paperback, Pocket Book #1.
Posted by Fantastic Reviews at 9:20 PM