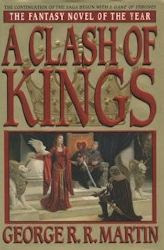 Continuing with the A Song of Ice and Fire posts, Aaron has reviewed A Clash of Kings, book two in the series, by George R.R. Martin on Fantastic Reviews. The cover shown is the orginal hardcover. I like this cover much better than the "people-less" cover art on the new editions. (For an example of the new cover art concept, see A Feast for Crows).

From Aaron's review:
"A Clash of Kings is the second volume of George R. R. Martin's highly successful series, A Song of Ice and Fire. A Song of Ice and Fire is a lengthy retelling, with added fantastic elements, of the War of the Roses. So I am told, anyway; I am no British historian...."

"A Clash of Kings picks up soon after A Game of Thrones left off. The threats to the Seven Kingdoms from the supernatural Others in the North and from dragons and nomadic Dothraki warriors across the sea have yet to materialize. As for the internal struggles for control of the Seven Kingdoms, however, the battle has been joined."

To read the entire review (warning: there are spoilers):
A Clash of Kings
Posted by Fantastic Reviews at 11:05 AM