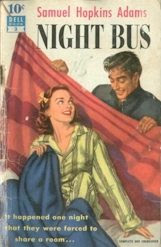 Originally published in Cosmopolitan magazine (a "slick" magazine even then, not one of the pulps), Night Bus was reprinted as #3 in Dell Books' series of 10¢ books published in 1951. These books were undersized and contained a single short story, reproducing the "dime novel" format that was successful in the Nineteenth Century but had completely disappeared a generation before the Dell 10¢ books, or "Dell Dimers," came along. The Dell Dimers were not a commercial success and disappeared after just 36 titles. These unusual books are now quite hard to find, and a few are very rare. Among the most rare Dell Dimers is next week's Book of the Week, the only science fiction title in the series.
Posted by Fantastic Reviews at 5:10 PM