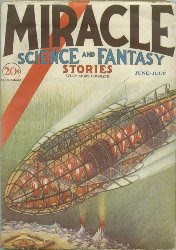 You have now seen all of the science fiction pulp magazines from the decade after Amazing Stories first appeared in 1926: Amazing, Wonder, Astounding, and Miracle (well, not really, because there were some hero pulps with significant SF elements like Doc Savage and The Secret 6, and there was a British SF magazine called Scoops, but we have to stop somewhere). However, while Amazing Stories was the first science fiction magazine, it was not the first magazine of fantastic literature, which encompasses fantasy and horror in addition to science fiction. Some argue that the first magazine of fantastic literature was Black Cat, which started way back in 1895, or Thrill Book, a short-lived pulp magazine from 1919, but I don't believe either was sufficiently focused on fantasy to qualify. You will see an issue of the first real magazine of fantastic literature next week.
Posted by Fantastic Reviews at 5:09 PM