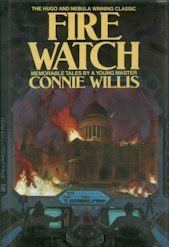 Connie Willis signed my copy of Fire Watch two weeks ago, when she was so amazingly kind as to come to Denver to meet with my son and a group of his 4th and 5th grade classmates, who had just finished reading her outstanding novel Doomsday Book, next week's Book of the Week.
Posted by Fantastic Reviews at 11:05 PM