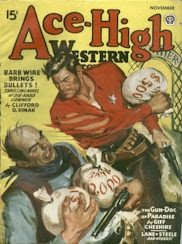 Since all of my favorite authors have had the courtesy not to die in the last week, we return to our survey of the old pulp magazines. The Magazine of the Week is the November 1945 issue of Ace-High Western, one of the Western pulps.

I am not a big collector of Westerns, but I acquired the Magazine of the Week because the lead story, "Barb Wire Brings Bullets!", is by Clifford D. Simak, one of my favorite Golden Age science fiction writers (featured in one of my "Neglected Master" book reviews: A Choice of Gods), another example of how freely the pulp writers crossed genre barriers. I also liked the wonderfully vibrant cover on the Magazine of the Week. Most of the Western pulps distinguished themselves from the other pulp genres with less garish, higher quality cover art, and what fun is that?

Westerns were among the most popular of the pulp magazine genres -- witness the fact that Ace-High Western ran for 30 years, while its sister magazine Ace-High Detective lasted all of nine issues. Unlike science fiction, however, it is not accurate to say that the pulp magazines created Westerns as a genre. Westerns became a distinct genre during the heyday of the dime novels in the 19th Century, for example the Deadwood Dick dime novel that was our January 23 Book of the Week.

Westerns have declined in readership over the years, but still linger as a discrete publishing category, largely thanks to the continuing popularity of Louis L'Amour. Louis L'Amour is another author who established his career in the pulp magazines, usually writing under the pseudonym Jim Mayo. It is ironic that L'Amour arguably saved the Western genre from extinction, since he started out primarily in a different pulp genre, then switched to Westerns as that genre disappeared. His original genre of choice was perhaps the most important genre of the pulp era, but it no longer exists as a separate publishing category. Next week's Magazine of the Week will be an example of that lost genre.
Posted by Fantastic Reviews at 10:53 PM