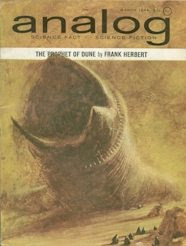 With only a few exceptions, bedsheet magazines are the largest-sized items in my collection. Next week's Book of the Week will be one of those exceptions, a book published in a format like a tabloid newspaper. This rare book is sought by collectors of both science fiction and, would you believe, punk rock paraphernalia.
Posted by Fantastic Reviews at 9:39 PM