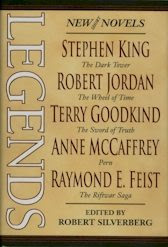 If the worlds' leading science fiction and fantasy authors will all refrain from dying this week, next week's Book of the Week will begin a survey of some of the most recent additions to my collection. In honor of the American Library Association' s Banned Books Week, we will begin with a novel that (like A Wrinkle in Time, our BOTW three weeks back) ranks high on the list of most frequently challenged books.
Posted by Fantastic Reviews at 11:10 PM

Hi
Found your blog on google while searching for a Legends review.
So is this book any good? you really just blab about what it is but you don't actually mention if it is any good. I haven't read any of the authors because of my niche reading. Grrm is my favourite and am considering buying Legends just got the Hedge Knight.

The Book of the Week posts on the blog generally look at the books from a collector's perspective. As it happens, I also wrote a review of the Legends anthology for Fantastic Reviews. For my other reviews, see the Fantastic Reviews home page.