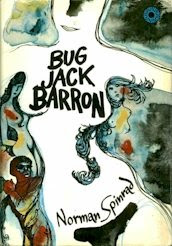 Bug Jack Barron was nominated for both the Hugo and Nebula Awards for Best Novel of 1969. Kurt Vonnegut's Slaughterhouse-Five was also a nominee for the awards, but both novels lost out to our last Book of the Week, The Left Hand of Darkness by Ursula K. LeGuin.
Posted by Fantastic Reviews at 11:22 PM