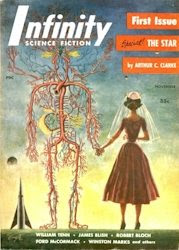 Infinity, edited by Larry T. Shaw, was one of a bumper crop of digest science fiction magazines that appeared in the mid-1950's. This inaugural issue contains stories by some of the best writers of the day, including Robert Bloch, James Blish, and William Tenn. At the same time, publishers were beginning to print collections of short stories all by a single popular author. Next week's Book of the Week will be an early collection of Arthur C. Clarke short fiction, notable for the unusual orientation of the book's cover.
Posted by Fantastic Reviews at 10:33 PM

Great blog! Wondering how and why I didn't discover this place before!

Thanks, Hedi! Most of our meaty stuff is over at the Fantastic Reviews site. This blog was a bit of an afterthought, but people seem to enjoy the Book of the Week posts.