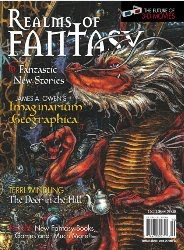 Vylar Kaftan is a new writer to watch. She has published some two dozen pieces of short fiction in the last five years, in small but high-quality venues such as Clarkesworld, Helix, Lone Star Stories, Paper Cities, and Sybil's Garage. (I won't mention that she was a tocmate of mine in the Glorifying Terrorism anthology, because pimping my one published story again would be pathetic.) "The Luckiest Street in Georgia" is Kaftan's first appearance in any of the genre's major print magazines, but surely not her last.
Posted by Fantastic Reviews at 10:41 AM