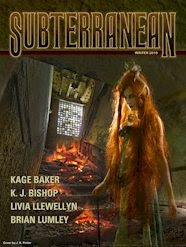 Incidentally, I do not intend to turn the Story Recommendation of the Week into an obituary column (the "obit" effect contributed to the current hiatus of the Book of the Week, which became depressing), but by coincidence I came across "The Bohemian Astrobleme" just before Baker's death, and what better way to honor the memory of a departed author than by enjoying her work?
Posted by Fantastic Reviews at 4:15 PM