Aaron's Story Recommendation of the Week :: If You Enjoyed This Story . . . by Sarah Totton 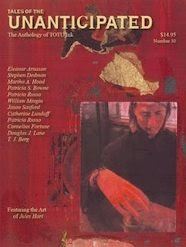 The story recommendation of the week is for "If You Enjoyed This Story . . ." by Sarah Totton, a short short from the recently released Issue #30 of Tales of the Unanticipated.

So Jason Sanford, who wrote the lead story for this issue of TOTU, generously sends me a free signed copy of the magazine (details at his blog), and just to prove myself a miserable ingrate I promptly skip right past Sanford's story and find another story in this issue to recommend -- adding insult to the injury that I have yet to do a SROTW for Sanford's "Sublimations Angels," which desperately deserves one. But at least this furthers Sanford's goal of brining attention to TOTU, an excellent semiprozine created in 1986 by the Minnesota Science Fiction Society, published roughly annually, which has printed a trememdous array of authors over the years. Issue 30's lineup includes Sanford, Totton, Eleanor Arnason, Stephen Dedman, Matthew S. Rotundo, Patricia Russo, Barbara Rosen, and many others. If you're an aspiring writer, TOTU is a great place to submit, because editor Eric Heideman reads all submissions himself and often sends helpful comments on the stories he rejects.

Heideman's tag to "If You Enjoyed This Story . . ." is "And now for something completely different...," which is fitting. This story is a Pythonesque absurdist romp. It sort of follows Ernie as he tells a peculiar story to Clarence:

"'And there was a plague upon the land,'" said Ernie, "'And on that day it rained frogs.'"
"You've already read that bit," said Clarence.
"Oh. 'And on that day there was a plague of locusts.'"
"You've done them too."
"Oh.... And on that day the people were visited by a host of ducks."
"Ducks?"
"Fire-breathing ducks."
"Again?"
"What?"
"There were fire-breathing ducks in last night's story."
"Those weren't ducks. They were chartered accountants ... fire-breathing chartered accountants."
"Oh. Okay. So that's why they were doing people's taxes."
"And then setting fire to them, yes."

Ernie and Clarence are repeatedly interrupted, however, by the stories' sponsors. And yes, I realize "word from our sponsor" gags have been done to death.

It is fair to say that "If You Enjoyed This Story . . ." is a supremely silly assortment of tired old jokes with only one redeeming virtue: I laughed like hell all the way through. And that's not just because I have a sophomoric sense of humor (although I surely do) -- I read this story out loud to a group of about 16 people and they all laughed. So this is objectively funny stuff, and you should check it out.

Sarah Totton has appeared in such cool places as Realms of Fantasy, Fantasy On-line, Polyphony, Black Static, Tesseracts, and others. And if you don't like oddball humor, I'm guessing most of her work isn't as silly as "If You Enjoyed This Story . . .."
Posted by Fantastic Reviews at 10:10 AM

Thanks for the recommendation. It's nice to know there are other people out there (besides me and the TOTU editorial team) who have progressed beyond the mere freshman sense of humor into a more mature and sophisticated sophomoric sense of humor :)

You bet! I hope I never make it to junior year.