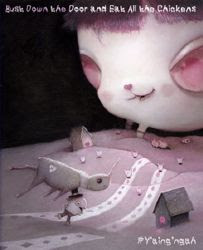 Brandi Wells is just starting on an MFA, but she has already put out plenty of good work, most of it flash fiction, much of it not fantastic, and quite a bit of it in the form of lists don't ask me why. She has popped up at McSweeney's, Improbable Object, Apt, Hobart, and other places, with hopefully a great deal more to come.
Posted by Fantastic Reviews at 11:25 AM

Labels: 2010, Brandi Wells, Bust Down the Door and Eat All the Chickens, short story, story recommendations