Battle of the Books, Spring 2012, Second Round :: The Man from Primrose Lane by James Renner vs. Throne of the Crescent Moon by Saladin Ahmed 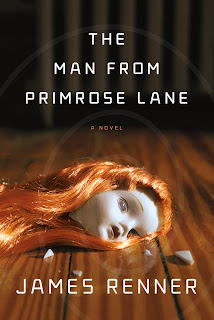 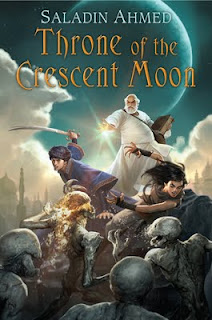 For our final second round match of the Spring 2012 Battle of the Books, James Renner's The Man from Primrose Lane squares off against Throne of the Crescent Moon by Saladin Ahmed. The book I most want to continue reading after 50 pages will be the last entrant in the Final Four of this bracket.

Billed as a cross-genre book, the first 50 pages of The Man from Primrose Lane start with a murder mystery, about crime writer David Neff investigating the murder of the strange and reclusive "Man from Primrose Lane." In the first 25 pages, we learned that David's wife Elizabeth recently committed suicide, and he is barely managing to hold himself together for the benefit of their son Tanner. The next 25 pages begin with a flashback to David and Elizabeth falling in love in college. In the present day, David takes Tanner to a peculiar museum, then meets Katy Keenan, a key figure in his investigation—the Man from Primrose Lane kept a diary of her activities, even though they were strangers. It's hinted that Katy may be Elizabeth's lost twin sister, who was abducted as a child (but Renner will have to work hard to justify the coincidence if she is).

Throne of the Crescent Moon is a fantasy novel set in a medieval Arabic society. In the first 25 pages, we met Doctor Adoulla Makhslood, the last ghul hunter in the great city of Dhamsawaat. He's received the call to battle, even though he's getting too old for this sort of thing. In the next 25 pages, Adoulla fights off a group of ghuls with the help of his small but dangerous assistant Raseed and Zamia, a young woman who can change into a lion, whose tribe was slaughtered by the ghuls. Along the way, Adoulla and Raseed encounter the Falcon Prince, who urges overthrow of the ruling Khalif in oddly 21st Century terms—his followers actually use the rallying cry "Share the wealth!"

The Battle: This is a rare instance where the book that would have won after 25 pages is not my winner after 50 pages.

Throne of the Crescent Moon had an outstanding opening sequence, showing us a strong fantasy setting with an Arabic feel, a very interesting pair of villains who do horrible things not because they enjoy doing evil but because their blood magic uses fear as fuel, and an aging hero who would much rather spend the afternoon drinking tea than continuing to fight the denizens of hell.

The opening of The Man from Primrose Lane was also solid, but less distinctive than Throne of the Crescent Moon. The beginning sequence is straight mystery (through 50 pages there still are no fantastic elements, although the scene with Elektro the Robot will have nostaligic appeal to SF readers), and struck me as less memorable than Ahmed's, although I liked the offbeat feel to his story and characters.

So Renner had an uphill battle to try to overcome Throne of the Crescent Moon. He did it with a crafty old authorial trick: he got me to care about his characters.

The flashbacks to David and Elizabeth falling in love despite, or perhaps because of, her obsessive-compulsive tendencies are believable and charming. The Elektro the Robot scene introduces some themes of the story while showing us David's imperfect but loving relationship with his son. And the glimpse of Katy at the end of the first 50 pages suggests a wonderfully quirky character I'd like to see more of. The characters all have real depth, and even though Renner is easing us slowly into the mystery story, he's dropped enough hints for us to feel that what he's showing us will prove meaningful.

Meanwhile, in pages 26-50, Saladin Ahmed didn't draw me into the different levels of his story as successfully as Renner did. The introduction to the Falcon Prince left me cold—to my tastes it takes more subtlety than this to bring modern political concepts into a medieval fantasy story—and the initial battle with ghuls was pretty standard swords-and-sorcery fare. More importantly, the characters didn't develop much through this section. The intriguing villains have been offstage since Chapter 1. I like the concept of an elderly fantasy hero, but in this passage Adoulla's age was a non-issue; the battle should have left him exhausted, but didn't seem to affect him at all. We get a chapter from the point of view of his devout assistant Raseed, which portrayed him as so uptight I can't find him believable or interesting.

This is sounding too harsh. Saladin Ahmed is a talented new writer, whose Campbell nominations were well-deserved. I look forward to finishing both Throne of the Crescent Moon and The Man from Primrose Lane. But forced to choose only one of the two to keep reading, I'd have to continue down Primrose Lane.

THE WINNER: THE MAN FROM PRIMROSE LANE by James Renner

The Man from Primrose Lane moves into the semefinals to face The Flame Alphabet by Ben Marcus.

To see the whole bracket, click here.
Posted by Fantastic Reviews at 3:19 PM