Battle of the Books, Summer 2012, First Round :: Faith by John Love vs. My Vacation in Hell by Gene Twaronite 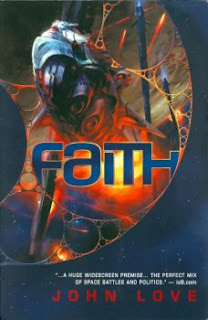 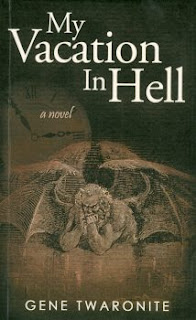 The first matchup of the Summer Bracket of the 2012 Battle of the Books pits Faith by John Love against My Vacation in Hell by Gene Twaronite. Per our contest rules, I have read the first 25 pages of both, and the winner will be the book I most want to continue reading.

After a patrolling warship is destroyed by the ship Faith, Weapons Officer Sarabt, a Sakhran, an alien humanoid with claws, is the sole survivor of a crashed lifeboat on the desert planet of Bast 3. He is mortally wounded and pregnant. Yes, he not she. He hopes to communicate the need to stop Faith to his fellow Sakhran officer on the Commonwealth's Outsider class ship Charles Manson. Hundreds of years earlier Faith devastated Sakhran space.

Elsewhere, in another solar system, there are malfunctions in the remote guidance of a long convoy of space freighters approaching the moon of Anubis 4. Captain Copeland of the Wulf, who is escorting the convoy, rightly fears the ship Faith is causing the malfunctions. Copeland is forced to vaporize some of the unmanned freighters he's escorting to prevent a crashlanding.

My Vacation in Hell: self-published, February 2012, 187 pages, cover design by Abigail Westbrook based on 1861 engraving “Lucifer, King of Hell” by Gustave Dore. My Vacation in Hell is a darkly humorous young adult fantasy. It’s a sequel to Gene Twaronite’s earlier middle grade novel, The Family That Wasn't. The first 25 pages cover a little more than four chapters.

My Vacation in Hell begins with a short future chapter, a teaser, in Hell. The teenage protagonist, John Bazukas-O'Reilly-Geronimo-Giovanni-Li Choy-Echeverria, called by an acronym of his last name, John Boggle, did a book report on Dante's Inferno. Via a daydream, John takes his own a trip to hell. The scenery of hell is modernized. A subway-like station leads to a misty endless plain. The gate to hell is a down elevator where he meets his best friend and guide, not coincidentally, named Virgil. When I stopped reading, John and Virgil were traveling in hell on a Harley-Davidson motorcycle with a sidecar.

A serious, somewhat disturbing, topic is included in My Vacation in Hell. When considering the people whom he’d put in hell, John Boggle mentions that "Uncle" Vinnie sexually abused him.

The Battle: Faith is a gritty, somewhat brutal, space opera in other solar systems. My Vacation in Hell is a chatty, sometimes humorously quirky fantasy set in the 1960s.

In Faith, the first two chapters are merely prefaces to the main story. There's blood and death, plus things are blown up. The setting is futuristic, with spaceships and aliens, but I have no idea of when or where. No flashy new technology has been introduced. There's a definite feel of threat from the ship Faith.

My Vacation in Hell seems like a stroll to Hell. The first person narrator, John Boggle, talks about this and that, offering up his opinions. There are some interesting sights in Hell, but there’s not much character interaction, and, so far, little sense of danger or urgency.

In my opinion, the characters and their emotions feel more real in Faith than in My Vacation in Hell. Although I hope that John Boggle will resolve his abuse issues, I'd rather read about those who will fight against the seemingly invincible ship Faith.

THE WINNER: FAITH by John Love

Faith will advance to meet either Fair Coin by E.C. Myers or The Coldest War by Ian Tregillis in the second round.

To see the whole bracket, click here.
Posted by Fantastic Reviews at 9:15 PM

you should totally read the rest of FAITH, that book was incredible! One of my top reads for 2012.

Faith advanced to the second round in Battle of the Books. Stay tuned!