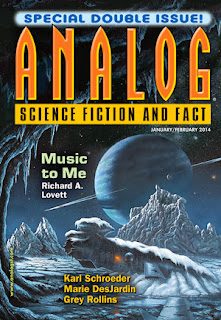 Karl Bunker is a fellow Writers of the Future winner (Vol. 23), and has since appeared in Asimov's, F&SF, and Interzone. When you can sell to each of the top print magazines in the field, you're clearly doing something right. Incidentally, the January/February 2014 issue of Analog is a solid one, containing strong work by my friend Marie DesJardin, Thoraiya Dyer, Christie Yant, Richard A. Lovett, and others. It seems editor Trevor Quachri is doing an able job taking over for Stanley Schmidt.
Posted by Fantastic Reviews at 11:01 AM