Battle of the Books, Bracket Seven, First Round :: The Apocalypse Codex by Charles Stross vs. Free Radicals by Zeke Teflon 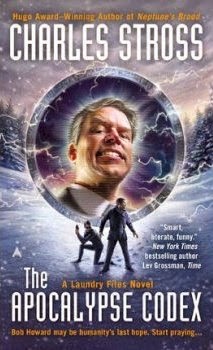 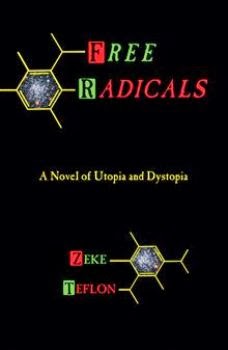 Our seventh match-up, and second to last, in the first round of Bracket Seven of the Battle of the Books features The Apocalypse Codex by Charles Stross going head to head with Free Radicals by Zeke Teflon. The winner will be the book I (Amy) most want to continue reading after 25 pages.

The Apocalypse Codex: Ace Books hardcover, July 2012, 255 pages, cover art by Mark Fredrickson. Charles Stross is a well-known Scottish science fiction author, who has written around twenty books. The Apocalypse Codex is the fourth book in his Laundry Files series.

In the prologue Bob Howard, the protagonist of the series, introduces himself. Bob is a computational demonologist working for an ultra-secret agency of the British government called the Laundry, which cleans up and defends the realm from occult, Lovecraftian threats. It's been nearly a year since Bob's last dangerous mission. He's only now recovered and returning to the job.

Chapter one begins with Persephone Hazard and Johnny McTavish secretly parachuting at night into Bavaria. They land on the roof of Schloss Neuschwanstein, the castle which inspired Disneyland's Castle. They break in and drill through the parquet floor. Persephone creeps into the space between floors, and returns a jeweled, occult amulet to its rightful place and removes the forgery from the display. Meanwhile, Johnny deals with a deadly, dog-like entity which enters their warding circle.

In chapter two, Bob Howard is being sent by HR to attend a week-long management training class for the civil service. Never mind that Bob works for an ultra-secret agency, he's given the cover story that he's a network security manager working on unpopular vehicle number-plate (license plate) recognition.

Free Radicals: A Novel of Utopia and Dystopia: See Sharp Press, June 2012, 303 pages. Zeke Teflon is a pseudonym of a nonfiction writer and performing musician. This is his first novel.

Free Radicals is set in the not-too-distant future. It's twenty years after the Troubles when EMP bursts destroyed electronics, including people's high-tech implants. Nano buildings have collapsed into ruins. Floating billboards show Uncle Sam urging the reporting of suspicious activities, and advertise emigration to the stars.

Kel (Kelvin) Turner wakes up surrounded by empty beer cans. He discovers that he has a wound on his head. Only after listening to his messages does he recall what happened. Yesterday Kel went to see Mig, his girlfriend, carrying a bottle of vodka. Mig was out. Kel got drunk with, then intimate with, Mig’s roommate. Mig is extremely pissed off.

There's a flashback about Kel's ex-wife. She got full custody of their young son and Kel didn't even get visitation rights. Twice after Kel merely tried to find out about his son, he was attacked by thugs.

Kel and several musician friends play a gig at Retro, an old-fashioned club. Kel is a guitarist. Mig comes in disguised as a "diesel dyke." The audience is unappreciative of their music. Drunks start calling for "Free Bird" and other oldies. A trio of Homeworld Protectors walk into the club and brutally haul off Kel. Apparently Mig reported Kel as a terrorist.

Kel is sentenced, without any defense or jury, to be deported to Extrasolar Penal Colony Number Three. Kel is put into cold sleep and shipped in a coffin-pod. He is one of thousands transported. Upon arrival, techs revive Kel and the other surviving prisoners.

The Apocalypse Codex is written in a sharp and witty manner. The characters seem to act and interact intelligently. What the occult amulet does isn't thoroughly explained. So far, Bob Howard is only dealing with the civil service bureaucracy. But Bob's office job can be curiously odd. In the preface, Bob says he's tasked to "keep an eye on some departmental assets that are going walkabout." No specific occult danger has been revealed, not yet anyway.

Free Radicals tells about Kel, a middle-aged man who has been screwed over in life, especially by women. This story line didn't play that well for me, but may work better for a male audience. The cynical, dark humor made this readable, for example, the song lyrics for "Abductee Blues" about extraterrestrials with a rectal probe.

There was more violence and sex than I needed, but it didn't seem gratuitous. Kel gets beaten up more times in the first 25 pages than I think any protagonist deserves.

The dialect of the judge who sentenced Kel to deportation, apparently a Black American, struck me as too politically incorrect, such as calling Kel Turner "Mistah Turna."

After 25 pages, I'm not sure where either of these books will go. But I know that I'd rather read about the clever characters fighting some occult threat to the world.

The Apocalypse Codex advances to the second round to face either Apollo’s Outcasts by Allen Steele or Blood Zero Sky Coin by J. Gabriel Gates.

To see the whole bracket, click here.
Posted by Fantastic Reviews at 11:37 AM