Battle of the 2012 Books, Bracket Eight, First Round :: Your House Is on Fire, Your Children All Gone by Stefan Kiesbye vs. The Age of Miracles by Karen Thompson Walker 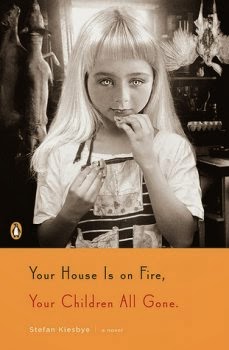 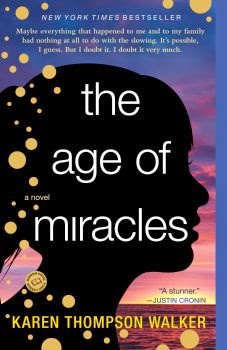 The first match-up in the first round of Bracket Eight of the Battle of the 2012 Books features Your House Is on Fire, Your Children All Gone by Stefan Kiesbye going against The Age of Miracles by Karen Thompson Walker. The winner will be the book I (Aaron) most want to continue reading after 25 pages.

Your House Is on Fire, Your Children All Gone: Penguin Books, September 2012, 198 pages, cover photo by Simen Johan. In Your House Is on Fire, Your Children All Gone, alternating first-person narrators look back on tragic events that occurred some 40 years earlier in the sleepy German village of Hemmersmoor. Our first narrator Christian returns to Hemmersmoor after decades away and meets some very old friends, Alex and Martin and Linde. They attend the funeral of another old friend, Anke, where Linde proceeds to spit and piss on her grave. In disturbingly understated language, Martin then narrates the tale of when a new family to the village was wiped out on a flimsy suspicion they engaged in cannibalism. The opening 25 pages close with Christian describing how, at seven years old, he wanted to see an adults-only carnival attraction called "Rico's Journey Through Hell." The carnie Rico told him to capture his sister's soul in a glass vial, whereupon Christian returned home and strangled her.

Stefan Kiesbye is a German author now living in New Mexico. Your House Is on Fire, Your Children All Gone was his first novel, preceded by his award-winning novella Next Door Lived a Girl. As far as I can tell, his other fiction books have only been published in German, under the titles Messer, Gabel, Schere, Licht and Fluchtpunkt Los Angeles.

The Age of Miracles: Random House hardcover, June 2012, 269 pages. The cover shown is for the later paperback edition. In the opening pages of The Age of Miracles, the news breaks that the earth's rotation is inexplicably slowing. Our first-person narrator Julia was a young girl when this happened. She recalls the bewilderment of her parents and friends, as well as their dread as they wonder whether civilization can survive.

The Age of Miracles is the first novel by Karen Thompson Walker, but I made it a seeded book in this bracket because it was a great commercial success and very well received. (A notable excpetion was the review by Christopher Priest, which concluded, "This is the kind of book, with its allegedly vast payments to the author, that will suck the oxygen out of bookselling for several months.")

The Battle: This battle features two first novels in which adults reminisce about awful things that happened to everyone they knew during their childhood. In The Age of Miracles, the awful things result from an external change: the slowing of the earth's rotation. In Your House Is on Fire, Your Children All Gone, the awful things are internal, done by the book's characters to each other.

Both books open well, beginning with strong opening lines. Your House Is on Fire, Your Children All Gone opens:

Time is of no importance. I have returned to Hemmersmoor to live in the same house in which I grew up, the same cramped house in which my father and my sister Ingrid died when I was a schoolboy.

This strikes me as a simple but effective opening, which then gains resonance as we discover that the narrator's sister died because he killed her, and as Kiesbye later repeats the "time is of no importance" sentiment in a beautiful passage:

Time is of no importance. I was young and didn't know a thing about our time. There had never been a different one in Hemmersmoor. In our village time didn't progress courageously. In our village she limped a bit, got lost more than once, and always ended up at Frick's bar and in one of Jens Jensen's tall tales.

We didn't notice right away. We couldn't feel it.

We did not sense at first the extra time, bulging from the smooth edge of each day like a tumor blooming beneath skin.

Although overall I like the writing in both books, in my opinion some flaws creep into both as the story progresses.

My quibble with the writing in The Age of Miracles is a lack of restraint by the author. For example, after the news breaks of the days lengthening, the narrator says they all forgot about the soccer game scheduled that day, except for one girl:

I heard later that only Michaela showed up at the field, late as usual, her cleats in her hands, her long hair undone, her red curls flying in and out of her mouth as she ran sock-footed up the hill to the field——only to find not a single girl warming up, not one blue jersey rippling in the wind, not one French braid flapping, not a single parent or coach on the grass. No mothers in visors sipping iced tea, no fathers in flip-flops pacing the sideline. No ice chests or beach chairs or quarter-sliced oranges. The upper parking lot, she must have noticed then, was empty of cars. Only the nets remained, billowing silently in the goals, they the only proof that the sport of soccer had once been play on this site.

To my tastes, if it stopped at "on the grass," this would be a nice passage. Instead, the author strains too hard, beating a simple concept to death, and ending on an awkward note ("they the only proof").

Despite my nitpicks, overall the prose in both books is solid. The battle comes down to which author has convinced me after only 25 pages that his or her story is going someplace interesting.

Karen Thompson Walker does not have me convinced, for two reasons. First, she hasn't gotten me interested in any of the characters yet, all of whom so far strike me as nondescript suburbanites, lacking in personality. Second, she has constructed a science fictional scenario——What if the rotation of the earth suddenly slowed down?——but she has not given me the confidence in her analysis and research that I need to suspend disbelief. In the opening pages, she says nobody notices the day is lengthening for several days. Whaaaat? When I check my email box, it tells me the exact time of sunrise and sunset; the first time the sun missed its cue, everybody would know about it. Later, Walker says the slowing "altered gravity." If she means the earth's mass is actually changing, she should say so, because wow! I suspect she means instead that there is less outward centrifugal force to offset gravity, but the way she says it is so imprecise I've lost confidence in her to tell me accurately what would happen if the earth really were to start spinning more slowly.

Meanwhile, after 25 pages, Kiesbye has also not given me characters I like, but they certainly do have personality. When Linde pisses on the grave of her former best friend, it tells me something about her, and it makes me curious what happened in their past to cause that level of contempt. More importantly, when Martin describes murders he witnessed as a child and Christian describes a murder he committed as a child, in utterly matter-of-fact terms, the effect is simultaneously chilling and engrossing.

THE WINNER: Your House Is on Fire, Your Children All Gone by Stefan Kiesbye

Your House Is on Fire, Your Children All Gone advances to the second round to take on either The Diviners by Libba Bray or Sharkways by A. J. Kirby.

Posted by Fantastic Reviews at 9:38 PM