Battle of the 2012 Books, Bracket Eight, Championship Round :: Osama by Lavie Tidhar vs. Libriomancer by Jim C. Hines 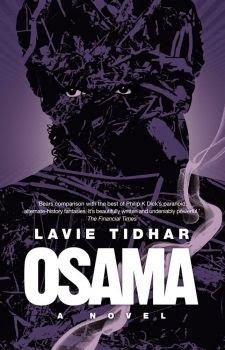 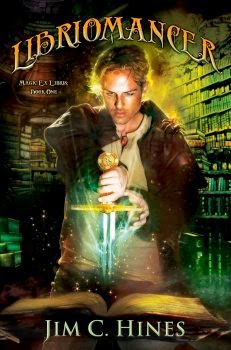 We have arrived at the championship round of our current bracket of the Battle of the Books. In one corner we have Osama by Lavie Tidhar. In the other corner we have Libriomancer by Jim C. Hines. Two fine competitors. I (Aaron) have read through Page 200 of both these books, and the novel I most want to continue reading to the end will be the champion of Bracket Eight of the Fantastic Reviews Battle of the 2012 Books.

Osama: Solaris, October 2012 (published in UK by PS Publishing in 2011), 302 pages, cover art by Pedro Marques. Lavie Tidhar is an Israeli writer now living in London. Osama won the 2012 World Fantasy Award. Osama made it to the championship by overpowering The Steam Mole by Dave Freer in the first round, by defeating Beyond Here Lies Nothing by Gary McMahon in the second round, and by pushing past The Diviners by Libba Bray in the semifinals.

The setting of Osama is an alternate universe where Osama bin Laden is not a real terrorist, but the hero of a series of pulp novels, the plots of which parallel actual terrorist attacks from our world. Our hero Joe is a private investigator hired by an enigmatic woman to find the author of the Osama books, who writes under the pseudonym "Mike Longshott." In the first 100 pages, Joe tracked down the publisher of the books in Paris. Most of the next 100 pages take place in London, where Joe believes he will find the author. But Joe repeatedly encounters interference from people who do not want him to find his target. One clue leads Joe to an opium den, where he has a vision of another world like his own, but more frenetic and computerized. It's a world that seems strange to Joe, but not to us.

Libriomancer: DAW, August 2012, 305 pages, cover art by Gene Mollica. Libriomancer is the first volume in Jim C. Hines' latest series, Magic Ex Libris. Libriomancer made it to the championship by easily beating out Dead Religion by David Beers in the first round, by defeating Untimed by Andy Gavin in the second round, and by overcoming A Pretty Mouth by Molly Tanzer in the semifinals.

The protagonist of Libriomancer is Isaac Vainio, who can reach into any book he has read and pull out objects described in the narrative. The trouble is, if he draws on this talent too often, he starts to lose himself in those fictional narratives. In the opening 100 pages of Libriomancer, a large-scale struggle broke out between supernatural beings. Isaac fears that the world's first libriomancer, Johannes Gutenberg, is behind the conflict. In the second 100-page section, Isaac tries to trace the rogue libriomancer causing the trouble. This effort prompts a dangerous visit with his dryad companion Lena to the underground lair of a great colony of vampires.

The Battle: One thing that becomes very clear doing the Battle of the Books is that there are many different ways to tell a good story. Osama and Libriomancer are awfully different but both excellent.

Libriomancer is a hoot for any lifelong reader of science fiction and fantasy. I can often identify the books Isaac is drawing objects from before Hines even names them. Hines works through the underlying magical system convincingly. And in the second 100 pages, he gives us a clue about the nature of the villain Isaac is facing that I won't spoil for you, but I found it a terrific surprise.

Meanwhile, notwithstanding the consistently elegant writing, Osama has the feel of a well-paced noir mystery. But the mystery isn't really about Mike Longshott, the author of the Osama bin Laden books, but about how the universe of those books relates to our protagonist Joe. Why do people who know something about the bin Laden stories refer to Joe as a "refugee" or a "fuzzy-wuzzy"? The closer he gets to Mike Longshott, the less Joe understands about his own place in the world:

Joe looked up from the book and drew a deep breath. This was insane. Longshott's obsessively neat facts and figures seemed designed to snare him, entrap him: names, times, street addresses, hobbies for the dead men. London. He thought: fuzzy-wuzzies, and giggled. Was he searching for Longshott, or was Longshott searching for him? The pulp writer was leaving him a trail of crumbs to follow, and he was following, and the world was slowly unravelling around him, a threadbare tapestry that could no longer quite comfort him against the chill.

The Battle of the Books is not about making a case that one book is objectively better than the other. I'm not even saying one book is better in my subjective opinion. I decide the battles on a single subjective criterion: which book do I most feel compelled to keep reading?

Libriomancer is a lot of fun. I enjoy it every time I pick it up. I expect I will enjoy reading the sequels. But when I put it down, I stop thinking about it pretty quickly. When I put Osama down, it stays in my mind. Tidhar's language continues to resonate. I keep thinking about the book's tough but ultimately lost protagonist, the shifting boundaries between his universe and mine.

I don't know that Osama is better than Libriomancer. I don't even know if I'm enjoying it more. But I know I find it tremendously intriguing. And if I had a fire tonight and both books burned up, I know which one I would immediately have to replace so I could finish reading it.

Osama wins Bracket Eight of the Fantastic Reviews Battle of the 2012 Books. Congratulations to Lavie Tidhar as our newest Battle of the Books champion!

We've crowned a winner for this bracket, but soon we'll announce a whole new bracket of sixteen books. Jackie, our new reviewer for Battle of the Books, will be judging the next bracket. This will give Aaron a break, to focus on some short fiction recommendations. Stay tuned for more book battles to come!
Posted by Fantastic Reviews at 8:26 PM