Battle of the 2013 Books, Bracket One, First Round :: The Cusanus Game by Wolfgang Jeschke vs. The God Tattoo by Tom Lloyd 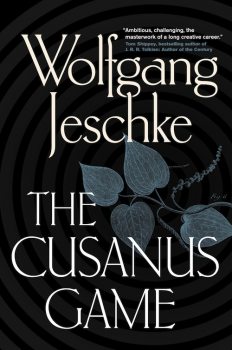 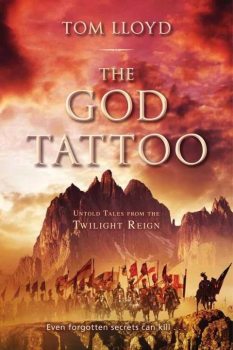 Our seventh and next to last first round match of Bracket One of the Battle of the 2013 Books involves The Cusanus Game by Wolfgang Jeschke going up against The God Tattoo by Tom Lloyd. The winner will be the book I (Jackie) most want to continue reading after 25 pages.

The prologue in The Cusanus Game finds the caravan-leader Emilio awakened by the "hum and rumble" of heavy repellers. One of his guards Bakhtir angrily brings two bruised and bloodied men to Emilio. The men were runners who survived their escape, unlike their other two companions who had died. They had attempted to leave the caravan through the repellers, which create the border between the past and future. Bakhtir's anger and mourning comes because one of the dead men is his son.

The year is 1425, and Emilio has brought supplies for the airship, which arrived from the mid twenty-first century. Emilio and Bakhtir meet holograph men who aren't really there but can communicate while they take supplies. Distraught, Bakhtir attempts to kill one of the future men, resulting in the hasty departure of the airship. Emilio and Bakhtir barely escape.

The first chapter begins in mid twenty-first century Italy where Domenica lives in a war-ravaged town, with the factions still fighting. Domenica needs to cross the bridge over a dry riverbed. Sandbags line one side of the river while armored vehicles and a tank sit on the other side. A man tells her she can't cross because of the danger. "But I live there!" she states. She pushes her battery-dead "lectric" over the bridge. The soldiers let her pass. So, while the factions fight, life continues.

Domenica's boyfriend Bernd is handsome, but flawed. Entertainment in the city is brutal and cruel: one show includes barbaric sex on stage. Domenica is disgusted, but Bernd is entranced. She decides their relationship is over. She crosses paths with a modified military dog who is dying from the inside out due to self-destructing implants. "Help me," says the dog. Domenica gives him a chocolate bar.

War caused trauma seems to be everywhere, from creatures to landscape. CarlAntonio are Siamese twins, with Carl riding like a backpack behind Antonio. Stavros, fellow tenant of Domenica, has a prosthetic tongue—which was cut out while in captivity during the war.

The God Tattoo contains eleven stories. For this book, the 25 pages I read included one and a half short stories.

The first story, "A Beast in Velvet," follows the Captain of the City Watch of Narkang. He is called to investigate a gruesome crime that involves blood, gutted people, and runes scratched on the walls. When a second gruesome crime occurs, the Captain's superior brings in Nimer, one of the King's Men, to help with the investigation. Nimer declares the murders to be either a sacrifice for summoning or banishing daemons or caused by a vampire. Nimer works with the Captain, who eventually comes up with a surprising suspect.

The second story, "The God Tattoo," begins with a large, "white-eye," humanoid creature Daken and his human companion Yamal, walking down the road. They had been fighting in a war on the losing side and now feel dirty, tired, and hungry. Daken observes a traveler riding toward them. Being a white-eye, Daken wants that human for his evening meal. Yamal hopes the traveler has food in his knapsack so he can enjoy a meal as well. When the traveler arrives, Daken attacks him and misses. The traveler uses magic to confuse Daken's vision. The one traveler becomes two and then the traveler looks like Yamal and then he's the traveler again. Daken lunges at the traveler but severely wounds his companion Yamal instead, due to the illusion created by more magic. The traveler says that if Daken does as he demands, Yamal, who is now at death's door, will live.

The Battle:  We have two different types of books to decide between, which is never easy. The God Tattoo is an epic fantasy short story collection that offers stories from the world of the author's "Twilight Reign" series. The Cusanus Game is a futuristic science fiction novel that involves disaster and time travel.

The Cusanus Game is a novel that, so far, offers tragic background stories that come with being in a war-torn country, which we see through the eyes of Domenica. Crude, crass, morbid, and yet fascinating, the stories within the novel both pull me in and push me away. The writing seems masterful at this point. There are some confusing jumps in time, some being centuries and others being months.

Time-travel is involved, but after 25 pages I only know that the humans in the future need supplies from the past. After the airship leaves the past, Emilio says that they have time. But time to do what? Change the direction of the future? I’m curious.

The God’s Tattoo contains eleven stories, and unfortunately, Battle of the Books stopped me in the middle of the second story. The excellent writing pulled me into the stories. The first short story had a nice twist at the end, which I hadn't foreseen. Ending my reading in the middle of the second story left me wanting to find out who the traveler was and to discover more about the magic. The Twilight Reign, so far, seems to offer stories that take place in a violent, coarse world.

Sadly, though, after reading 25 pages of both books, I (Jackie) must choose a winner to advance to the next round of Battle of the Books. Only one book can continue on in the tournament. Even though both books contain believable characters and interesting plots, I really want to learn more about the fate of Domenica and discover her role, if any, in time travel.

THE WINNER: The Cusanus Game by Wolfgang Jeschke

The Cusanus Game advances to the second round, to take on either The Scholar, the Sphinx and the Shades of Nyx by A. R. Cook or The Doctor and the Dinosaurs by Mike Resnick.

To see the whole bracket, click here.
Posted by Fantastic Reviews at 7:04 PM