Battle of the 2015 Books, Bracket One, First Round :: Fortune's Blight by Evie Manieri vs. Oathkeeper by J. F. Lewis 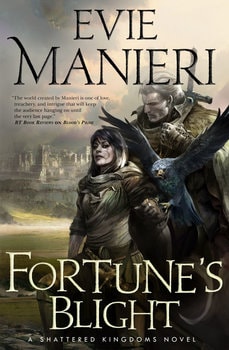 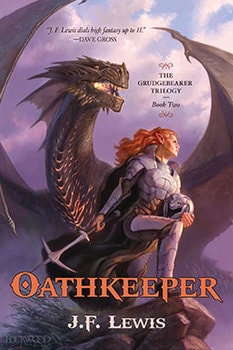 For the third battle of Bracket One of the Battle of the 2015 Books we have Fortune's Blight by Evie Manieri going against Oathkeeper by J. F. Lewis. The winner will be the book I (Aaron) most want to continue reading after 25 pages.

Fortune's Blight: Tor, February 2015, 363 pages, cover art by Kekai Kotaki. Fortune's Blight is Book II of the Shattered Kingdoms series. Book III, Strife's Bane is due out in December. In the first book, Blood's Pride, King Daryan led a revolution against the foreigner Norlanders, who had invaded and enslaved his people, the Shadari. The revolution was (spoiler alert!) successful, but problems still abound.

In the opening 25 pages of Fortune's Blight, we see the mercenary Lahlil (formerly known as the Mongrel), who was instrumental in helping Daryan to overthrow the Norlanders, but is now running from her past among a tribe of Nomas desert nomads. She has daily seizures she attributes to different gods competing for her soul, and in this universe she may be right. We also meet Daryan, new king of the Shadar, patrolling his kingdom with his Norlander love Isa, on a winged beast called a "triffon." Amid post-war hardships, both Daryan's people and Isa's band of turncoats are nearing open rebellion against Daryan's and Isa's leadership.

Oathkeeper: Pyr, June 2015, 377 page, cover art by Todd Lockwood. Oathkeeper is Book Two of the Grudgebearer Trilogy. The third book in this series, Worldshaker is due in August. In this series, a magical race called the Eldrennai long ago created a nearly immortal race of non-magical warriors, the Aern, as warrior-slaves to defend the Eldrennai against the reptilian, magic-resistant Zaur. The Aern were recently freed, and may yet come seeking vengeance from the Eldrennai, who are trying to make an alliance with the plant-like Vael against that scenario.

In the first 25 pages, we see Prince Rivvek of the Eldrennai, whose magical powers have been crippled by physical injuries, consolidating power in preparation for an anticipated attack by the Aern. It seems you need to have read the first book to know why he is in charge and not his father the king or his older brother. Meanwhile, a group of fierce and pernicious Zaur warriors launch an assault against a massive Vael "root tree." Prince Kholburran of the Vael sees his love Malli injured in the attack, but he refuses to abandon her and vows to heal her, which apparently means they must marry.

The Battle: For once in the Battle of the Books, we have a fair fight. Two second volumes in two epic fantasy series go head to head. After reading the opening sections of both, my guess is if you like one of these books, you'd like the other, so I'll have to do some hair-splitting here . . .

Oathkeeper seizes an initial lead because it puts us into the action quickly, showing an early skirmish between the vicious Zaur and the strange tree-like creatures the Vael, and introducing multiple kinds of magic (albeit magic with a retro feel, based on the "elements" of earth, air, water, and fire) and magical beasts. In contrast, Fortune's Blight has a bit of a ponderous opening, with understated fantasy elements (other than the winged triffons) and the only real action happening in a brief flashback.

But Fortune's Blight presses a couple important advantages to eat into that margin. First, I prefer the prose in Fortune's Blight. Evie Manieri's writing has a good flow to it, while Oathkeeper too often feels overdramatic, as if J.F. Lewis is trying to write passages to accompany trumpets and cymbals, with an unfortunate tendency to run-on sentences:

Sealing vents in active sections of the maze of underground passages that comprised Xasti'Kaur, the Shadow Road, made timing tricky at certain strategic phases of the plan, but it could also catch the Eldrennai by surprise and leave them gasping in the blackdamp if they figured out what the Sri'Zaur were actually planning before the shard-wielding assassins of Asvrin's Shades sowed confusion and death among those who had lulled themselves into a false sense of immortality.

This would be too much for me, I think, even if I had read the previous book and knew what the "blackdamp" and Sri'Zaur and Asvrin's Shades were.

Fortune's Blight's other major advantage is I'm finding it easier to relate to the characters. Evie Manieri does a very good job of taking large-scale conflicts and making them personal for her characters. For example, King Daryan faces resistance from his own people because he has enlisted help from some of the hated Norlanders. The prejudice against Norlanders is personal for him, because he has fallen in love with one, and the two of them can never forget their differences, which include a painful variation in the temperatures of their skin:

They both knew the risks of these trysts, however infrequent, but the urgency of satisfying their passion made everything else, even the constant pain of their touch, irrelevant. She pitied ordinary couples whose embraces cost them nothing, whose love-making came so cheaply that they could undertake it on a whim and forget it just as easily. They couldn't know what it was like to have a lover's arms circle around the small of their back like a pair of blacksmith's tongs straight from the fire, or have kisses rain down like a shower of embers.

That is a lovely passage, one which will stay in my mind.

Fortune's Blight advances to the second round to face either The Grace of Kings by Ken Liu or Infinity Lost by S. Harrison.

To see the whole bracket, click here.
Posted by Fantastic Reviews at 6:40 PM