Battle of the 2015 Books, Bracket One, Second Round :: Flex by Ferrett Steinmetz vs. Hexed by Michael Alan Nelson 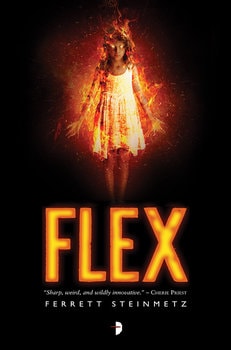 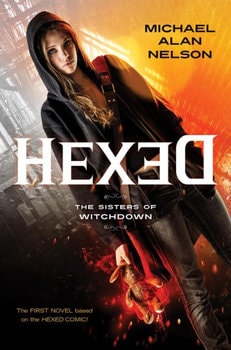 For our third match-up in the second round we have Flex by Ferrett Steinmetz doing battle with Hexed by Michael Alan Nelson. The winner will be the book I (Aaron) most want to continue reading after 50 pages.

Flex: Angry Robot, March 2015, 423 pages, cover art by Stephen Meyer-Rassow. Flex is the first book in the 'Mancer trilogy. The second volume, The Flux, appeared last October. Steinmetz was a Nebula Award nominee for his novelette "Sauerkraut Station." Flex overpowered Human Monsters by Gregory Lamberson to get into the second round.

In the universe of Flex, 'mancers can perform impressive magic (and anyone can do it with the help of a drug called "Flex"), but there is always a backlash (called "the Flux"), so dangerous that use of this magic is illegal in the United States. In the first 25 pages, our protagonist Paul Tsabo, a former cop turned insurance company bureaucrat, was surprised to find he could do "bureaucromancy," magic performed with paper. But the first time he did it a fire ensued, severely injuring his six-year-old daughter. In the second 25 pages, Paul learns that the insurance company he works for has declined to pay for his daughter's reconstructive surgery, because it has determined the fire was deliberately caused by another 'mancer. (The fire was a backlash not only from Paul's use of magic but also from magic done by a young man in the same apartment building who was intentionally given an overdose of Flex, bad luck for Paul and his daughter, but just the kind of bad luck that tends to happen with the Flux.) Paul is afraid of his magic, but it appears he will have to use it in order to track down the offending magician (the one who gave that kid his overdose) and get his daughter the surgery she needs.

Hexed: Pyr Books, May 2015, 278 pages, cover art by Larry Rostant. Hexed is the opening volume in the Sisters of Witchdown series, which is based on Michael Alan Nelson's Hexed comic books. Hexed beat Blood Will Follow by Snorri Kristjansson to get into the second round.

In the opening 25 pages of Hexed, a teenage girl named Gina went with friends to a haunted house called the Worcester House. A creepy old woman she saw in the mirror there followed her home and later pulled her into a mirror right in front of Gina's bewildered father. The father then begged our young protagonist, Luci Jenifer Inacio das Neves (Lucifer, for short), to use her knowledge of the occult to help. In the next 25 pages, Lucifer visits the Worcester House with Gina's boyfriend, David. He tells her one of Gina's girlfriends got hold of an old book they used for a summoning in the Worcester House. Gina visits the friend, who needs immediate help with the demon who has possessed her.

The Battle: Doing battle in this match-up are two urban fantasies with an "X" in the title. I admit urban fantasy is generally not my preferred subgenre of SF/F, but so far these are both well written and fun to read.

Hexed moves along a nice pace, making it easy to keep turning pages. Lucifer is an interesting character, a teenager leading a lonely life as an outsider, who feels resentful at times but doesn't let that prevent her from helping other people. The strength of the book is the wry humor, which comes through both in the narrative voice and in Lucifer's snarky dialogue. Lucifer tells David she is a thief and when he asks her why she decided to become a thief, she says, "The brochure said I'd get to do a lot of traveling." I'm not in the target audience for a book about a teenaged girl battling demons and witches, but I'd be happy to keep reading this one.

The opening chapters of Flex are also nicely written, engaging the reader in the story very effectively. The opening passages have quickly gotten me into Paul's skin, as he is nearly overwhelmed by everything happening to him: pain and dread from his daughter's injuries, confusion when confronted by his ex-wife, fear but also excitement over his new-found magical abilities. By the end of 50 pages, he decides his only way to help his daughter is to find the magician out there using Flex to destructive ends and compel that person to help Paul learn how to use his powers safely. It's a dubious plan, but I want to see how it plays out for him.

So how to choose between two books that I'm enjoying through the opening 50 pages? Since I'm not usually an urban fantasy reader, the key is for a book to convince me that it's got more going on than the run-of-the-mill urban fantasy. While I'm enjoying Hexed, so far it feels like it could have been a script for an episode of Buffy the Vampire Slayer. That's not a bad thing, but it doesn't make me feel especially compelled to keep reading.

Meanwhile, Flex feels more original and unusual to me. It introduces a non-standard magical system — I especially like Paul's emerging ability to do magic by paperwork. Also, I very much appreciate how Steinmetz has quickly painted his protagonist into a corner. The first time Paul uses magic, his daughter ends up severely injured. That's an awful thing for a parent, and would naturally make him want to disavow ever using 'mancy again. Except it seems Paul won't be able to help his daughter recover without using it. That's the kind of dilemma that does indeed make me feel compelled to keep reading.

THE WINNER: Flex by Ferrett Steinmetz

Flex advances to the semifinals to take on either Letters to Zell by Camille Griep or The Just City by Jo Walton.

To see the whole bracket, click here.
Posted by Fantastic Reviews at 3:06 PM