"The Counsellor Crow" by Karen Lord :: Aaron's Story Recommendation of the Week 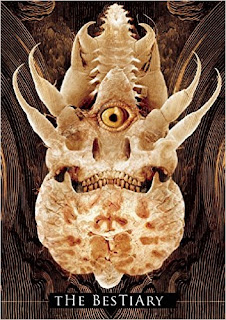 We are between brackets of the Battle of the Books, so time to catch up on some story recommendations.

My Story Recommendation of the Week is for "The Counsellor Crow" by Karen Lord, from the anthology The Bestiary, edited by Ann VanderMeer and published by Centipede Press (cover art by Ivica Stevanovic).

The Bestiary is an anthology of short pieces, each describing a creature one suspects does not actually exist. The gimmick is that there is one strange animal with a name beginning with each letter of the alphabet, plus creatures called The Ampersand and The          .

The strength of this anthology is the array of writing talent Ann VanderMeer has assembled. How can you go wrong reading pieces by such authors as China Miéville, Catherynne M. Valente, Brian Evenson, Vandana Singh, Michael Cisco, Stephen Graham Jones, Karen Heuler, Karin Tidbeck, Felix Gilman, etc. etc.? The weakness is the pieces are similar enough that after a while the book can start to feel like a single gag repeated until it gets tiresome.

But the best pieces here are very good indeed. To me the funniest story in the book is "The Daydreamer by Proxy" by Dexter Palmer, about a genetically engineered parasite that your employer urges to try, because it will make you a wonderfully efficient worker! At least for a while. I think the most clever and elegantly done story is "Tongues of Moon / False Toads" by Cat Rambo, about an animal remarkably efficient at camouflage. ("One may go so far as to imitate an alchemist and thus fall prey to a recursive trap, lost in a mental mise-en-scène, seeking itself.")


The turning point in the evolution of the Counsellor Crow took place not in Ildcrest, but in neighbouring Ilderland, where a new Prince and a resurgent nobility developed a strongly nationalistic and anti-modernist ideology that called for a return to old values and old ways. Modern technology was banned, foreigners were ousted, and the nobility tried a motley assortment of centuries-old garments, weaponry and rituals in an attempt to replace a Golden Age that never was with a New Age of their own devising. Naturally, with all the permutations and combinations of available customs, there were disputes, rebellions, and then civil war. The sacred battlefields of Ilderia returned, and the Counsellor Crows fed and grew fat.

The narrator of this scholarly article on the Counsellor Crow suspects the animal of using mimicry, speculating whether it is "the first recorded instance of a predator that mimics not the voice, nor the appearance, nor the scent of its prey, but their thoughts." The narrator ends with the alarming observation that the population of Counsellor Crows is now the highest on record.

Karen Lord, originally from Barbados, has only been publishing fiction since 2010 but already has amassed an impressive collection of awards. She does not often write short fiction, so "The Counsellor Crow" offers a rare opportunity to sample her writing in a single sitting.
Posted by Fantastic Reviews at 10:45 AM