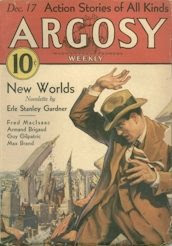 The Magazine of the Week is the December 17, 1932 issue of Argosy magazine.

When pulp magazines first came to dominate the market for fiction, most of the major pulps were general interest magazines such as Argosy, All-Story, and Blue Book. These magazines combined stories of many different types, including mysteries, westerns, war stories, adventure fiction, and science fiction and fantasy. Note the heading of the Magazine of the Week: "Action Stories of All Kinds." The magazines' authors were not limited to a particular genre, but often jumped between different kinds of stories.

The cover story of the December 17, 1932 Argosy (cover art by Paul Stahr) is "New Worlds," a science fiction story in which New York City is struck by a massive flood (which the author attributes to a reversal in the earth's magnetic field rather than global warming). "New Worlds" was written by Erle Stanley Gardner, who is much better remembered today for his mysteries and courtroom dramas, and especially for his creation of the character Perry Mason. For some reason, during the pulp era there was particular overlap between the mystery and science fiction genres. In future Book of the Week entries, you will see science fiction from mystery writers like Raymond Chandler and John D. MacDonald and mysteries from science fiction luminaries such as Isaac Asimov and Theodore Sturgeon. (The overlap continues, to a lesser degree, to this day - for example, Walter Mosley's new book is a science fiction novel.)

By exposing a large number of readers to different kinds of fiction, Argosy and the other general interest pulps allowed readers to discover which genres appealed to them, and gave authors the chance to develop a reputation writing particular types of stories. Erle Stanley Gardner ultimately won his fame as a mystery writer; next week's Magazine of the Week will feature an early pulp writer who developed a following writing science fiction.
Posted by Fantastic Reviews at 3:13 PM