Amy's Silent Movie of the Month :: The Four Horsemen of the Apocalypse (1921) 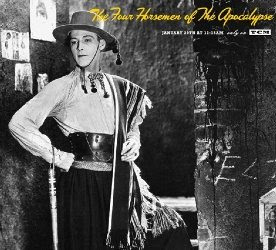 Last Sunday night, I watched an old movie on cable, on TCM (Turner Classic Movies), and I thought it was a quite good.

The Four Horsemen of the Apocalypse (1921), running time 134 minutes, was one of the top grossing silent films and is a drama concerning World War I. Despite the ominous title, which refers to Biblical prophecy, the settings are rarely on battlefields, yet it conveys the horrors of the War. The movie, which was directed by Rex Ingram, was based on a novel of the same title by Vicente Blasco Ibáñez.

This movie provided the breakthough role for Rudolph Valentino, who would go on to become one of the biggest stars of silent films. After seeing The Four Horsemen of the Apocalypse, I think I can understand why women swooned over Valentino. From his first scene, as a tango dancer and ladies' man, Valentino was impressive.

The movie starts with Madariaga, "The Centaur", a rich cattle baron in Argentina, who has two daughters. One daughter married a Frenchman named Desnoyers, the other a German named von Hartrott. Madariaga merely tolerates his German son-in-law and German grandsons. He openly favors his French grandson, Julio (Rudolph Valentino). After Madariaga's death, the German takes his family back to Germany and the Frenchman returns with his family to France. The time is shortly before the outbreak of World War I.

Julio Desnoyers lives decadently in Paris. His father (Josef Swickard) collects antiques for his castle. Julio has a relationship with the beautiful Marguerite Laurier (Alice Terry), who is unhappily married to an older man. By the end all are affected by World War I.

In 1995, The Four Horsemen of the Apocalypse was added to the National Film Registry in the Library of Congress, recognizing the cultural, historical and aesthetic significance of the work, as well as the risk of the original movie reel no longer being preserved.

As a side note, Valentino's tango sequence from this movie was parodied by Gene Wilder during the opening credits of The World's Greatest Lover (1977).
Posted by Fantastic Reviews at 9:24 AM