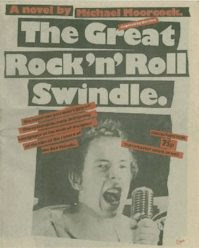 The Book of the Week is The Great Rock 'n' Roll Swindle, a bizarre punk rock novel published by Virgin Records and written by science fiction and fantasy author Michael Moorcock.

This original 1980 printing of The Great Rock 'n' Roll Swindle was issued in an unusual 11" x 14" format, like a tabloid newspaper. It was printed in connection with the film of the same title about the punk rock group the Sex Pistols, and contains multiple photos of Sid Vicious, Johnny Rotten, and the other Pistols.

Michael Moorcock was one of the leading voices of the "New Wave" of science fiction in the 1960's and remains an important figure in the SF/F field to this day. But Moorcock was a musician even before finding success as an author, and he remained involved with the music industry for many years. He wrote several songs for Blue Oyster Cult and collaborated extensively with the band Hawkwind.

The Great Rock 'n' Roll Swindle is supposedly a novelization of the film, which gave Sex Pistols manager Malcolm McLaren's skewed view of the punk rock phenomenon. Moorcock, however, was contemptuous of McLaren and took significant liberties with the book version, weaving the story into the ongoing chronicles of his own multifaceted recurring character Jerry Cornelius. After this tabloid edition, the book had a small print run in paperback, but remains probably the most obscure entry in Moorcock's Jerry Cornelius series.

From music, next week we will make a quick foray into sports, this time with no SF connection at all.
Posted by Fantastic Reviews at 11:41 PM