Aaron's Book of the Week :: Jackie Robinson: My Own Story 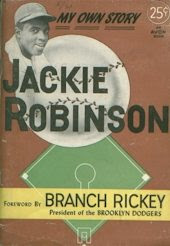 This Sunday, Major League Baseball will mark the 60th anniversary of Jackie Robinson breaking baseball's color barrier. In honor of the occasion, the Book of the Week is Jackie Robinson: My Own Story by Jackie Robinson & Wendell Smith, foreword by Branch Rickey. This rare book was published by Avon in 1949, two years after Jackie Robinson began his major league career. This book has no discernible connection to science fiction, but I had to acquire it as a loyal UCLA alumnus.

Years before Robinson broke into major league baseball, he was BMOC at UCLA. Oddly enough, baseball was his weakest sport at UCLA. He was far better known for his exploits in football (he led the nation with absurd averages of 12 yards per carry and 20 yards per punt return) and basketball (he was twice the leading scorer in the Pacific Coast Conference). He was also a star in track & field, a sport he learned to love watching his brother Mack, who won a silver medal in the 200-yard dash at the 1936 Olympics (finishing behind only the legendary Jesse Owens). Robinson was the first UCLA student to earn letters in four different sports.

After leaving UCLA in 1941, Jackie Robinson briefly played semiprofessional sports, which were integrated on the West Coast at the time, until he was inducted into the Army. He was one of the first African-Americans to become an Army officer through Officer's Candidate School (an opportunity he purportedly received through the intervention of heavyweight champion Joe Louis), but he never fought overseas because he was court-martialed for refusing an order to go to the back of an Army bus. He was ultimately acquitted and later honorably discharged, after the Army determined that the order was contrary to Army policy and Lt. Robinson was justified in defying it. From the Army, Robinson went back to sports, competing in semipro football and Negro League baseball, where he was spotted by a scout for the Brooklyn Dodgers. In 1945, visionary Dodgers owner Branch Rickey signed Robinson to a professional contract, after first obtaining Robinson's solemn oath to forbear for three years from retaliating against any of the racial bigotry he would inevitably face, a promise Robinson kept for exactly three years.

One of the UCLA Athletic Department's greatest sources of pride (along with its 99 NCAA championships, most of any school) is its role in the racial integration of society. UCLA operated a color-blind athletic department from the time the school was founded in 1919. Few people realize that Ralph Bunche, the first black winner of the Nobel Peace Prize, went to UCLA on an athletics scholarship before distinguishing himself even more for his academics, graduating valedictorian of his class in 1927.

While Jackie Robinson is rightly celebrated for breaking baseball's color barrier, not so many remember that his former teammate at UCLA, Kenny Washington, broke the NFL's color barrier. Indeed, because Robinson had to spend a year in the minor leagues before playing for the Dodgers, Kenny Washington actually donned a big-league uniform first, in 1946. The second black player in the modern era of the NFL was another Bruin, Woody Strode, who went on to have a successful acting career. Washington and Strode got the opportunity to play in the NFL when the Cleveland Rams moved to Los Angeles, because the commissioners of the Los Angeles Coliseum insisted that the team be integrated. The Coliseum was apparently embarrassed to host an all-white team, since L.A. was well accustomed to integrated football teams, largely thanks to the successes of Washington, Strode, and Jackie Robinson, both with UCLA and with the local semipro teams, the Los Angeles Bulldogs and the Hollywood Bears.

None of the three men who broke the color barrier in the NBA in 1950 was from UCLA, but Bruin Don Barksdale was the first African-American basketball player to play for the U.S. Olympic team and the first to play in the NBA All-Star Game, in 1948 and 1953, respectively. In 1968, UCLA tennis great Arthur Ashe won the U.S. Open to become the first African-American man to win a Grand Slam tennis tournament. Ashe remains the only black man to win the U.S. Open, Wimbledon (defeating fellow Bruin Jimmy Connors in the finals), and the Australian Open. (Yannick Noah is the only black man to win the French Open, for which we try to forgive his son his annoying tantrums on the basketball court.)

Jackie Robinson: My Own Story is a digest-format book, a bit larger than an ordinary paperback and held together merely with staples rather than glue. Several publishers experimented with this format in the 1940's and 50's, before thankfully abandoning it. We will return to science fiction next week with the most rare digest book in my collection.
Posted by Fantastic Reviews at 11:40 PM