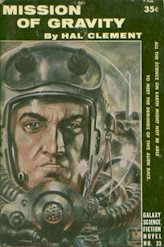 Clement was named Grand Master by the Science Fiction and Fantasy Writers of America in 1998. Always charming and friendly, Clement was a favorite at science fiction conventions. In 2003, shortly after the publication of his last novel, he attended Mile Hi Con, Denver's local convention, where he signed the Book of the Week for me under both the name Hal Clement and Harry Stubbs. At 81, he seemed in the best of health and spirits as he entertained the crowd. He passed away the next week from complications of diabetes. Next week we'll have another of the all-time classics of SF from 1953, this one from an author still going strong at age 89.
Posted by Fantastic Reviews at 3:32 PM