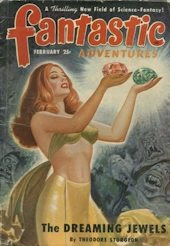 The Dreaming Jewels, aka The Synthetic Man, was one of the major science fiction novels of 1950, but it was Sturgeon's novel More Than Human (1953), our BOTW of two weeks ago, that became an acknowledged classic of the field. Neither novel had an opportunity to win a Hugo Award, however, because the SF field's leading award was not invented until 1952, and then took two years to catch on and became an annual event. So Hugos were awarded for works published in 1952 and 1954, but not for 1953. As fate would have it, 1953 saw the original publication of more all-time classics in the field of science fiction than any year before or (arguably) since. We've already seen More Than Human. In our next several BOTWs, we will see some of the other all-time classics of SF from 1953.
Posted by Fantastic Reviews at 10:26 AM

An eye-catching cover. I like this one better than last week's one for The Synthetic Man.